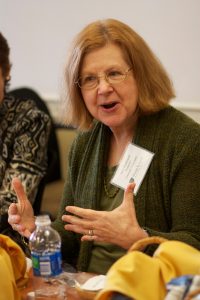 Mary Pendergraft has a way of bringing a calming presence to every room she enters.

Everyone seems to mention her warmth, her sincerity, and her ability to listen to opposing views without losing her patience.

As Professor Emeritus Rob Ulery joked, “Just dealing with my political ideas and various enthusiasm must have been a trial [for Mary], but she has always been gracious about it.”

Pendergraft might be the kindest person you will ever meet, but on top of that, she is a nationally recognized teacher-scholar whose depth of knowledge in Classical Languages is remarkable.

In addition to her role as chair of the Department of Classical Languages, Pendergraft was named President of the American Classical League last year. Her CV is filled with so many titles and honors she has earned over the years.

Assistant Professor Ted Gellar-Goad put it rather simply in describing Pendergraft’s impact in the field of Classical Languages.

“Mary was the key player in the reworking of the AP Latin exam, and so I can say — and this is no exaggeration — that Mary has touched the lives of more Latin students across the nation than basically any living person,” Gellar-Goad said.

Behind Pendergraft’s calming demeanor is a serious scholar. She has taught classes on the Age of Pericles, the Age of Augustus, Women in Antiquity, and practically any other topic the Classical Languages department has to offer.

“There is not much in our curriculum that she has not taught,” Associate Professor Emeritus Jim Powell said. “She has been the mainstay of the Greek program, regularly teaching at all levels from beginning to advanced. But she is no less involved in teaching Latin, particularly in upper-level courses.”