Brianna Aaron (’22) stared at her computer screen, making sure her wifi connection was strong, her volume was adjusted, and she was maintaining eye contact with each judge during the final round of the virtual Atlantic Coast Conference Debate Championship in April. She and her partner, Ruby Klein (’21), had come to the end of a marathon of rounds that would have normally been split over a few days. With a condensed timeline this year, the virtual format required tremendous focus, not only on the persuasive arguments themselves but also on their delivery across Zoom.

“We were worried about small issues that would never be a problem in an in-person format. But, I’d like to think that my experience with online Zoom courses aided in me being more comfortable using Zoom for an online competition. My partner and I made sure that we adjusted our pacing of arguments and that we took periodic breaks between rounds so that we weren’t sitting on Zoom all day long,” Aaron explained.

“Preparation and intensity of focus are usually balanced with plenty of social interactions outside of the rounds,” said Jarrod Atchison, John Kevin Medica Director of Debate. Since that couldn’t happen during the 2021 championship, Atchison and the other Wake coaches shifted their style to accommodate the change in modality and help the debaters find moments to decompress. “Imagine 12 hours of competition, where you’re trying to be persuasive in formats that are not designed to accomplish that. We had to create intentional spaces for the students to be off Zoom. If there was a 30-minute break before the next debate, we told them to go outside, walk around, do what they could to take this time for themselves,” he said.

In the end, Aaron and Klein were triumphant, and Wake Debate took home its 4th ACC win since the tournament restarted in 2015. Atchison viewed the win as a testament to the hard work Aaron, Klein, and the coaching team put in this year, taking the flexibility and creative approach that is built in the foundations of the Wake Debate program and applying them in the virtual world. “They gave a dominant performance,” he said. 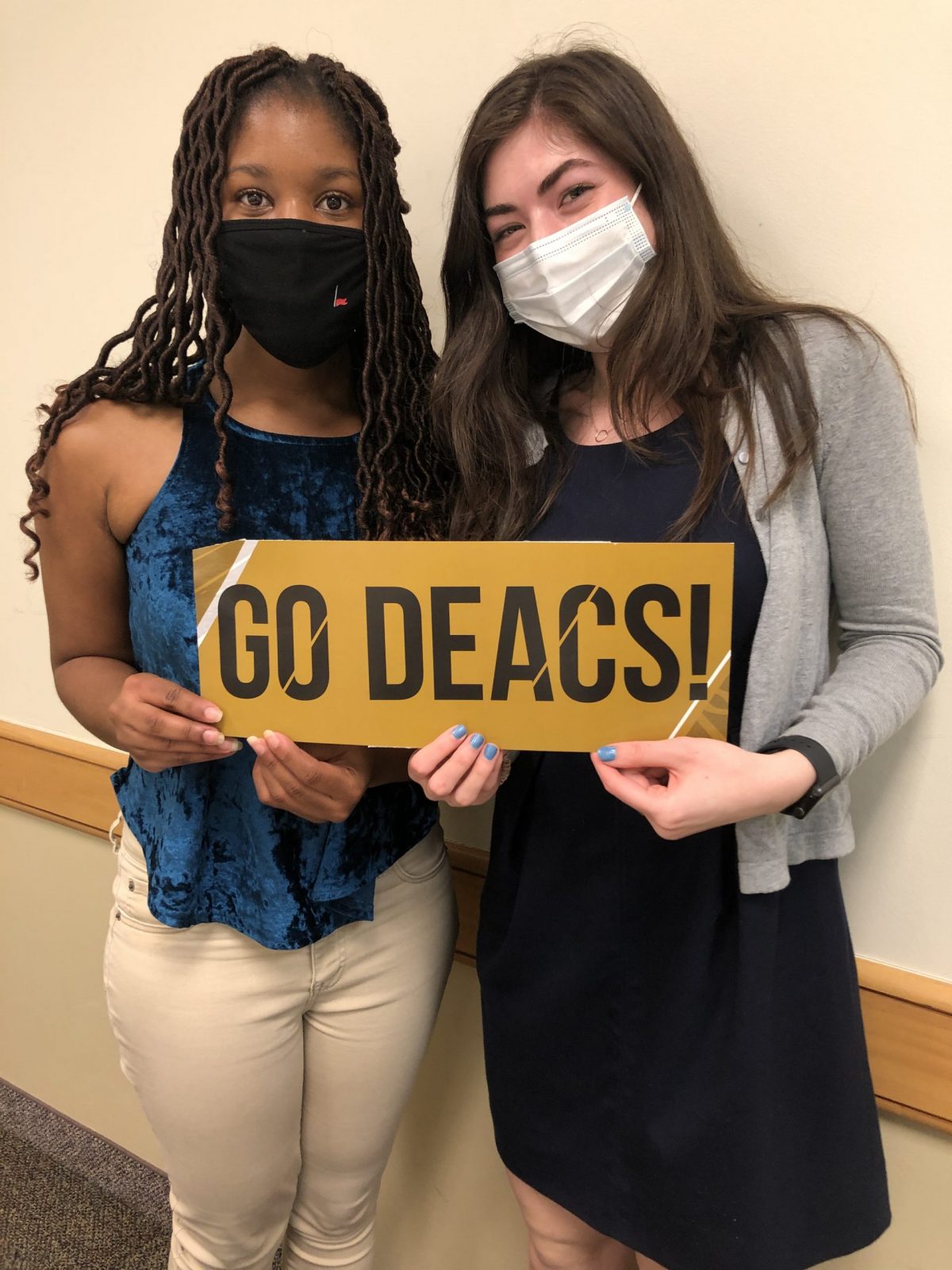 A Legacy of Success 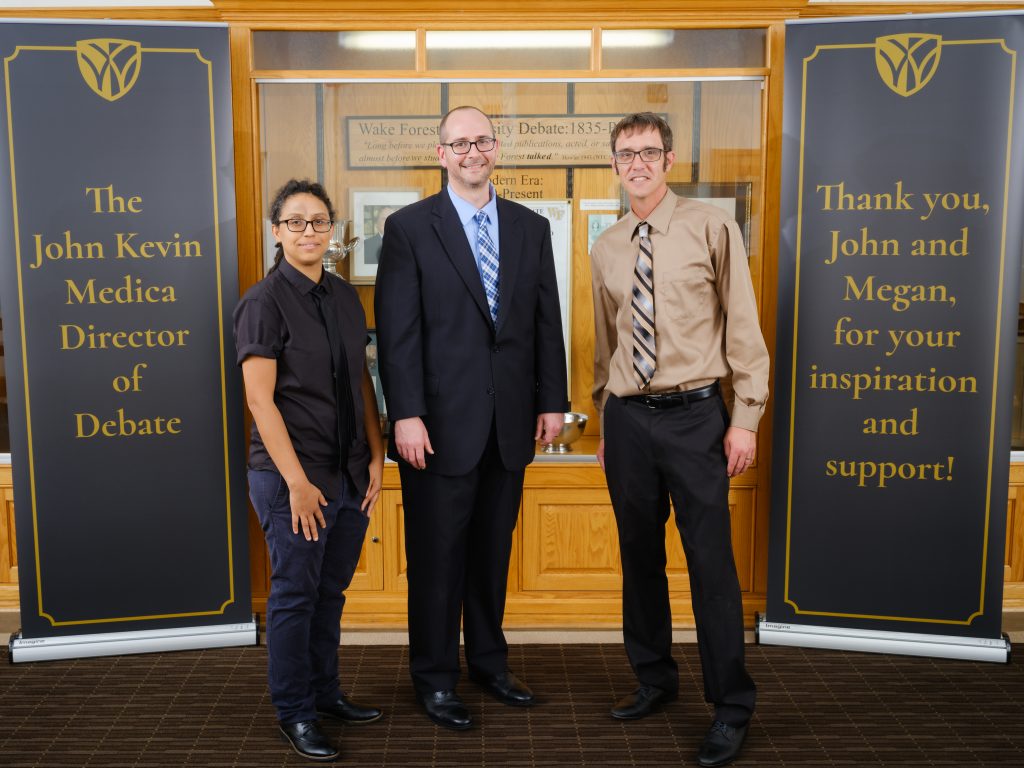 The debate program at Wake Forest has a long tradition of success that dates back to its start in 1835, just one year after the College was founded. Since 1955, Wake has won the National Debate Tournament twice and made the finals two additional times as well as the final four seven times. The program has recently surpassed Harvard for having the most number of top ranked teams for the past decade.

Wake Debate doesn’t just send teams to tournaments, it also hosts its own, the Franklin R. Shirley Classic College Debate Tournament. Started in 1956, the competition has been voted the Tournament of the Decade five decades in a row and is often the largest tournament of the season, bringing 1,200 guests to Wake Forest. “People from across the debate community love to come to the Shirley Classic tournament because the campus is gorgeous, the hospitality is outstanding, and the tournament draws the best competition,” Atchison said.

Ultimately, success isn’t about tournament wins or titles, Atchison said, but answering three vital questions: “What are we doing to make the debate community a better place? What are we doing to make debate a better or more powerful organization on campus? Are we enabling our students to go on to be the things that we’ll be very proud of whenever they leave Wake Forest?”

To accomplish these goals and more, the program is built on a team effort by coaching staff for the 28 or so students in Wake Debate. Atchison, a double Deac (B.A. ’01, M.A. ’03) and former Wake debater himself, returned to his alma mater as Director of the Debate program in 2010. Head coach Justin Green (’99) joined in 2012, and, in addition to his regular coaching duties, has since spearheaded the Piedmont Environmental Alliance’s Environmental Debate Program for high school students in Winston Salem. In 2017, Amber Kelsie was hired as the Associate Head Coach, and in 2019, Kelsie was voted the No. 2 overall coach and No. 3 overall judge for the past decade by the college debate community. Each year, the program also hires contract coaches, and six graduate assistants also help the squad.

Another aspect of the program’s success is its foundation on interdisciplinarity, or the Big Tent approach, as Atchison calls it. “The Big Tent philosophy enables students to come from history, sociology, arts, you name it. We have every major on campus represented, and we have arguments from across the disciplines. That’s a huge strategic advantage for us, because when we approach tournaments, we’re not limited to one ideological lens,” he said.

In addition to her ACC win, Aaron, who is double majoring in Sociology and Religious Studies with a minor in Communication, sees the interdisciplinary benefits of her time on the debate team as long lasting. “My ability to communicate with people from different backgrounds has improved … I’ve developed transferable skills that will last me a lifetime. As someone who will enter public policy and management in the future, I know that my history in speech and debate will help contribute to me getting to where I need to go,” she said.

For a program with such a long institutional history and such a broad approach that supports students from all backgrounds, it is no wonder that Wake Debaters have formed a vast and active alumni network. Recently, two alumni who have a law firm emailed Atchison with a request to fill a short-term position. It only took a tweet and a couple of emails, and he had connected them with a recent graduate whom they hired. “A daily part of my job is just keeping the intergenerational people connected to each other,” Atchison said.

“The Big Tent philosophy enables students to come from history, sociology, arts, you name it. We have every major on campus represented, and we have arguments from across the disciplines. That's a huge strategic advantage for us, because when we approach tournaments, we're not limited to one ideological lens. ” Jarrod Atchison, John Kevin Medica Director of Debate 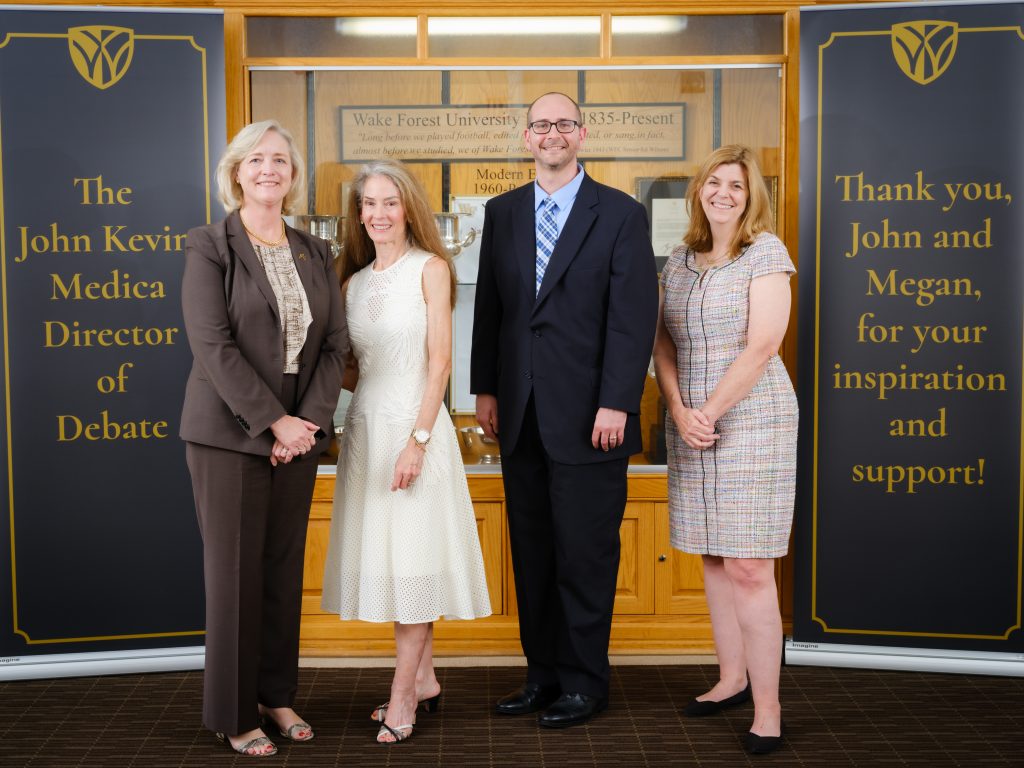 Atchison also attributes much of the debate program’s growth and success within the past decade to the support it has received, both institutionally and from donors with a heart for Wake Debate.

His new title, the John Kevin Medica Director of Debate, is named for the late John Medica (MBA ‘83), who was a longtime supporter of the program and trustee of Wake Forest. “It’s about as humbling a title I think is humanly possible. When I first met John, he came to debate meetings as a person interested in supporting the students, despite the fact that his résumé or his position on the Board of Trustees would have floored anyone in the room. He always greeted me and all the debaters with a huge warm smile, and he always wanted to hear what was going on with the students, how excited they were about their debates, and contribute these brilliant arguments that we used in competitions,” Atchison said.

A college debater herself, Megan Medica (MA ‘83) introduced her husband, John, to the world of debate several years ago. Soon, the couple found themselves in the halls of Carswell, meeting students and asking Atchison how they could help. “When I came back to Wake Forest in 2010, the team was down to four teams because the budget wasn’t able to sustain traveling people to a large number of places. Thankfully, John and Megan were able to say, ‘Let’s start helping right away,’” Atchison said.

Help, they did. The Medica’s annual gifts contributed short-term solutions for the program to expand the squad back to around 30 students and hire contract coaches. Soon, the students were headed to the best tournaments, too, and the Medicas joined them to show their support and pose helpful questions to finalize strategies.

Shortly before John Medica’s passing in 2017, the couple had decided to make their debate contributions a long-term part of their giving, which has led to a five-year annual gift that includes funding for the John Kevin Medica Director of Debate Atchison has received. “That Megan chose to honor John, with the overall gift to the debate team and with naming this particular position, is such an important reminder of John’s fundamental values. He was a problem solver, a creative thinker, and he used those energies to make the world a better place,” Atchison said.

Carrying this momentum forward, Atchison will continue to focus on student-driven and program-driven opportunities alike, approaching the future with the Medica mentality at the forefront. “That’s what I feel like every day when I come into work, that power of John’s name driving me to say, ‘What are we doing today to make Wake Debate a better place for the students involved, for the communities that it supports, and for the people who are the stakeholders?’”

“That's what I feel like every day when I come into work, that power of John's name driving me to say, ‘What are we doing today to make Wake Debate a better place for the students involved, for the communities that it supports, and for the people who are the stakeholders?’” Jarrod Atchison, John Kevin Medica Director of Debate