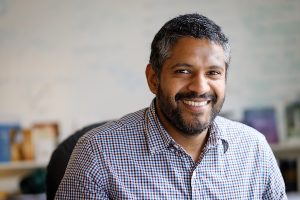 “I’m grateful to receive this endowed professorship, as well as for the opportunity to work at Wake Forest for the past 12 years. Wake Forest is one of the leading research hubs for the study of morality and character, and I feel lucky to be at a university that truly lives up to the teacher-scholar model,” said Jayawickreme.

Jayawickreme received the endowed professorship, one of the highest honors the College can award a faculty member, for his significant contributions to teaching, student mentorship, and interdisciplinary scholarship at the intersection of psychology and philosophy involving post-traumatic growth, well-being, moral character, and integrative theories of personality.

“Eranda is an exceptional teacher-scholar whose commitment to rigorous, engaged student learning at Wake Forest is matched only by his international reputation for explicating the complex relationship between character and adversity,” said Michele Gillespie, Dean of the College and Presidential Endowed Chair of Southern History.

During his decade-plus career at Wake Forest, he has received several awards, including the Scholar Development Award in 2011 and the Award for Excellence in Research in 2018. The Association for Psychological Science gave Jayawickreme its Rising Star Award in 2015.

Jayawickreme first joined the Department of Psychology working as a Postdoctoral Fellow with the Character Project in 2010. From 2011 and 2014, he led the Growth Initiative, a research project with undergraduate and graduate students focusing on post-traumatic growth that included interviewing people in Rwanda and Sri Lanka. During that time, he went from a Research Associate to Assistant Professor before becoming Associate Professor in 2018.

“Dr. Jayawickreme’s level of research excellence is comparable to the top scholars at the most prestigious research universities in the country. Yet at the same time, he is highly dedicated to our students, mentoring a substantial number of students every year, and is highly involved in the life of the university. He very much represents what it means to be a teacher-scholar at Wake Forest,” said Dr. Eric Stone, Professor and Chair of the Department of Psychology.

Examining the cross-section of psychology and philosophy has led Jayawickreme to contribute to several interdisciplinary projects. In addition to his work within the Department of Psychology, Jayawickreme also serves as a Science of Honesty Project Leader for the Honesty Project, a $4.4 million initiative of Wake Forest University and Carnegie Mellon University that explores new directions in the study of the character virtue of honesty.

Jayawickreme is also the Senior Research Fellow for the Program for Leadership and Character, where he is the Project Co-Leader with Executive Director Michael Lamb for the Exemplar Interventions to Develop Character Project, a $1.68 million initiative funded by the John Templeton Foundation.

“Eranda is one of the leading psychological experts on character in the world and one of the most generous and generative scholars in the field. He is a wonderful colleague and collaborator. We’re so grateful to benefit from his energy, insight, and expertise in the Program for Leadership and Character at Wake Forest,” said Lamb.