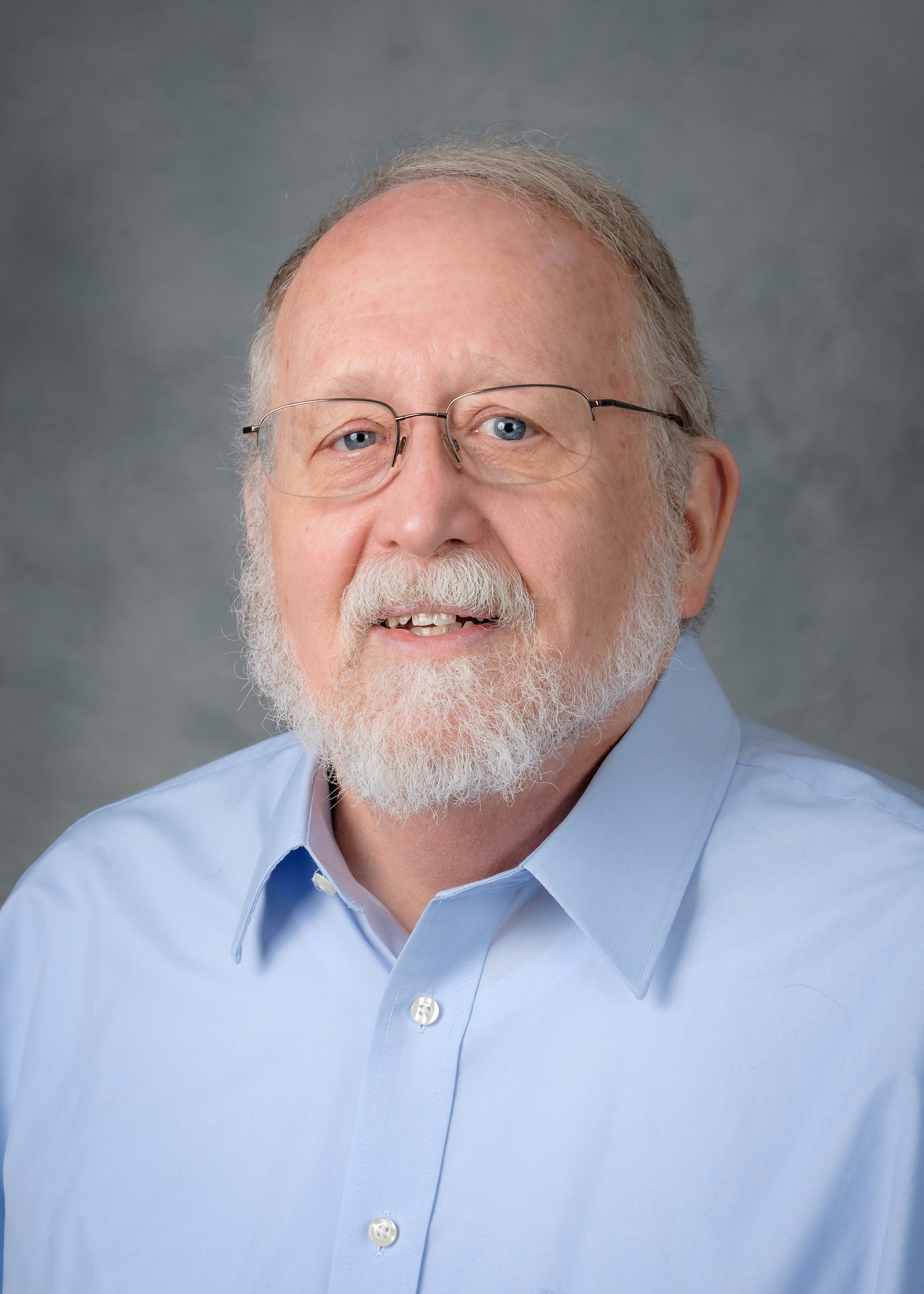 “The Computer Science Department should build a statue to Dr. John.” That’s what I read in a student evaluation of David John while I was department chair. Seriously. It may have been hyperbole, but it was characteristic of the many accolades about David’s teaching over the years. David would describe himself as tough and exacting, and no doubt he set high standards for his students, but he was unfailingly kind, helpful, self-effacing, and generous with his time. David has said that the most rewarding experiences in his years at Wake Forest have arisen from his interactions with students, and his dedication to students has been evident in his teaching.

William Turkett, Associate Professor and Chair of the Department of Computer Science, witnessed David’s interactions with students across their open office doors. William recalls, “I was deeply impressed with how engaged David was with the students he taught. I particularly appreciate how he would have students stop by his office for ‘oral presentations.’ This provided each student an opportunity for a one-on-one discussion, cultivated a sense of personal responsibility that is important beyond academia, and provided rich experience in technical and scientific communication.” Stan Thomas recalls the novel way that David would explain complex topics — describing integrated circuits as “rocks with legs” or picturing data communication in terms of “colorful packets” moving through fiber. The main point for David was always that students learn.

David has had a distinguished and varied career at Wake Forest. He was one of the first computer scientists, hired in 1982 as a founder in the newly formed Department of Mathematics and Computer Science. From pulling fiber-optic cable through tunnels to writing software to set up the first campus internet connection, David has been here to help from the ground up.

A pillar of the department as it grew over the years, David has given his time generously in service. He was a longtime Director of the Computer Science graduate program and was highly instrumental in its success. More recently, David was the interim Director of Academic and Instructional Technology, and in 2018, he took on the Herculean task of getting the WakerSpace formally started, taking it from an idea and molding it into a significant contributor to the campus learning ecosystem. In service to his academic community, David has been an ABET peer evaluator, helping other computer science departments to better serve their students.

“What has impressed me most about David for over 30 years is his honesty and willingness to help. His advice when I joined the department guided me in the right direction, and I still seek his advice after all these years.” Daniel Cañas, Associate Professor of Computer Science 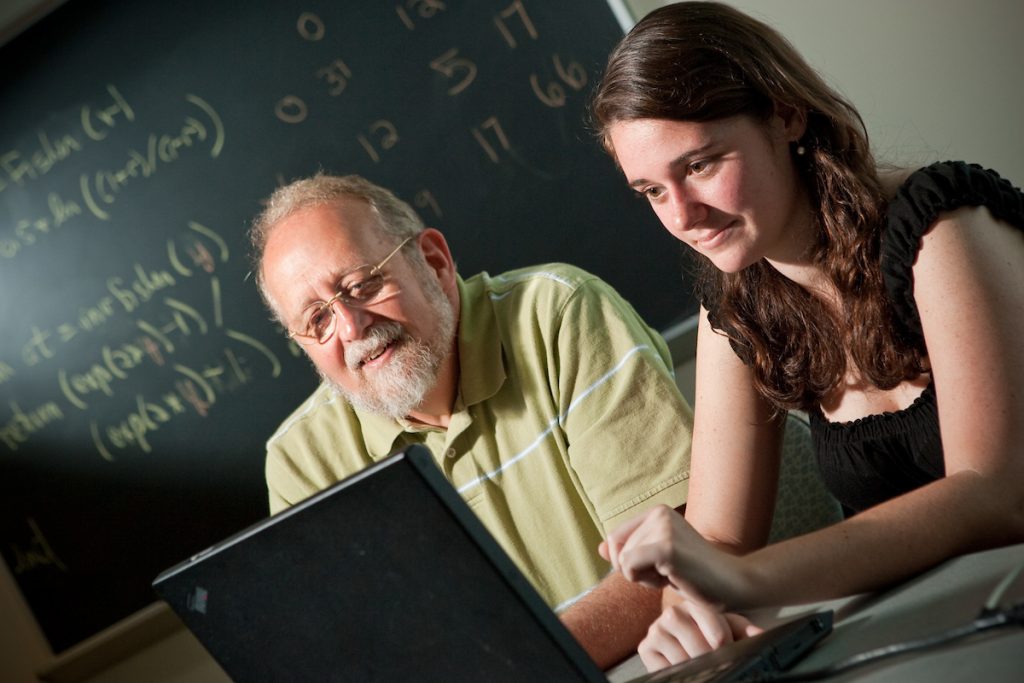 Wake Forest junior Rachel Black (’11) works with Professor David John on modeling algorithms as part of her summer research fellowship on in 2009.

In addition to his exemplary teaching, David has engaged with a rich set of research problems, collaborating with colleagues inside and outside his department. His research has ranged from genetic algorithms and security to bioinformatics, and in every area, David contributed his invaluable mathematical and algorithmic acumen.

Junior faculty speak appreciatively of David’s mentoring. Daniel Cañas, Associate Professor of Computer Science and one of David’s first colleagues, comments, “What has impressed me most about David for over 30 years is his honesty and willingness to help. His advice when I joined the department guided me in the right direction, and I still seek his advice after all these years.” Grey Ballard — who began his career at Wake Forest as a computer science major and returned as an Assistant Professor in 2016 — recalls doing a senior honors project with David and being encouraged by David to submit a paper for publication, thus launching Grey’s academic career. In Grey’s words, “David exemplifies faculty members who develop personal relationships with students and prioritize their development,” an ideal that drew Grey back to Wake Forest. Paul Pauca, who also was a Wake Forest computer science major who returned as a Professor, recalls that through David he discovered “there is much more to computer programming than just memorizing esoteric grammar. It’s about creativity, problem solving, and critical thinking, but in the sciences. David’s way of making advanced concepts understandable inspired me into academia and played a great role in my decision to choose a career in computer science.” Sam Cho, Associate Professor of Computer Science and Physics, describes David as “coming to his rescue” by allowing Sam to audit his course when he was a fledgling faculty member. Sam claims he has modeled all his teaching strategies from David’s ever since.

One thing I remember most about David, on a personal level, is his ready laughter. In meetings or during talks, when someone makes a little joke only to be greeted by a deadly silence, David can be relied on to offer his laughter. He’s like those affirming head-nodders that I love having in my classes. I appreciate David for that. He adds good humor and spirit to any room he enters.

Yes, it will be difficult to replace David John — loyal, honest, hardworking, collegial, generous, and caring. We will miss him in the department, and we wish him a happy, relaxing, and fulfilling retirement.

“There is much more to computer programming than just memorizing esoteric grammar. It’s about creativity, problem solving, and critical thinking, but in the sciences. David’s way of making advanced concepts understandable inspired me into academia and played a great role in my decision to choose a career in computer science.” Paul Pauca, Professor of Computer Science