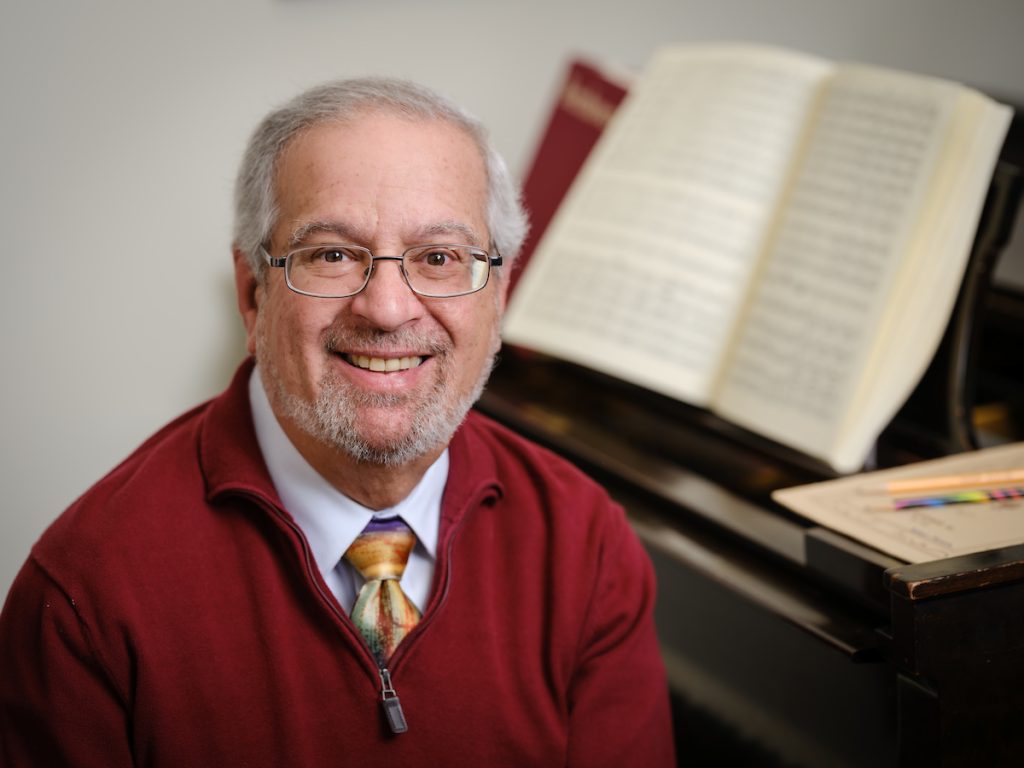 By Stewart Carter, Professor of Music

Master teacher. World-class Beethoven scholar. Community-Service Award winner. Proud husband, father, and grandfather. How does one encapsulate the 45-year career of a teacher-scholar-mensch of the caliber of David Levy?

David has been a leader across Wake Forest University and the community for nearly a lifetime. Born and raised in New York City, he earned his bachelor’s, master’s, and Ph.D. degrees at the Eastman School of Music in Rochester, New York. As a farm (ok, farm-town) boy from Kansas myself, we seemed to be an “odd couple;” yet we hit it off almost from the moment I joined the music faculty in 1982. Sharing lunches, sharing hotel rooms at musicology conferences, attending Wake Forest basketball games — we have shared a lot of good times and also some trying times, most of them related to health problems.

In time-honored Wake Forest fashion, David made his mark as a scholar and a teacher and also as an administrator. He drew worldwide attention with his work on Ludwig van Beethoven. His book Beethoven: The Ninth Symphony is now in its second edition. He served as one of the organizers of the New Beethoven Research Forums, which in pre-COVID times took place annually, beginning in 2011. He has been a frequent collaborator with Boston University’s Center for Beethoven Research and the Beethoven-Haus in Bonn, Germany. Beethoven has also served as a centerpiece for his teaching. He occasionally taught a course specifically on Beethoven, and Beethoven served as something of a centerpiece for his Music History II course, which he taught annually. Another favorite composer of David’s is Richard Wagner, whose Ring of the Nibelungen was the focus of his extremely popular First Year Seminar, which he offered numerous times. Beethoven in particular and Viennese music in general were part and parcel of his course offerings at Flow House in Vienna, where he taught four different semesters. He also served as Director for Flow House for several years.

David’s teaching spread well beyond the Wake Forest campus. From 1996 through 2006, he taught summer graduate courses in musicology at the Eastman School of Music. He has taught courses at the University of North Carolina School of the Arts. His less formal teaching experience includes many pre-performance lectures at Wake Forest for the Winston-Salem Symphony, Piedmont Opera, the Chautauqua (New York) Institute, and Vienna’s Franz-Liszt-Saal.

David has served the Department of Music, the College of Liberal Arts and Sciences, the University, the music profession, and the Winston-Salem community in countless ways. He chaired the Department of Music for 12 years; served for three years as the College’s Associate Dean for Faculty Development; and directed Wake Forest’s Artists Series. He’s held the position of President of the Faculty Senate, President of Winston-Salem’s Temple Emmanuel, and continues to serve, as he has for many years, on the Board of Directors of the Winston-Salem Symphony.

If Wake Forest had an election to choose its “Mr. Gregarious,” David would be among the strongest candidates. You couldn’t go anywhere with David — concert, athletic event, restaurant, or store — without running into someone he knew. And these friends would always greet each other with warm smiles, handshakes, and often a hug, at least in pre-COVID times.

Post-retirement, I know we will still see him around in familiar places and contexts. I know he’ll spend more time with his wife, son, daughter, and grandchildren. He will also spend more time at his and Kathy’s second home near Chautauqua, New York, where Kathy still serves as principal piccolo player of the Chautauqua Symphony Orchestra. But wherever he goes, he will always be a part of the Wake Forest family.