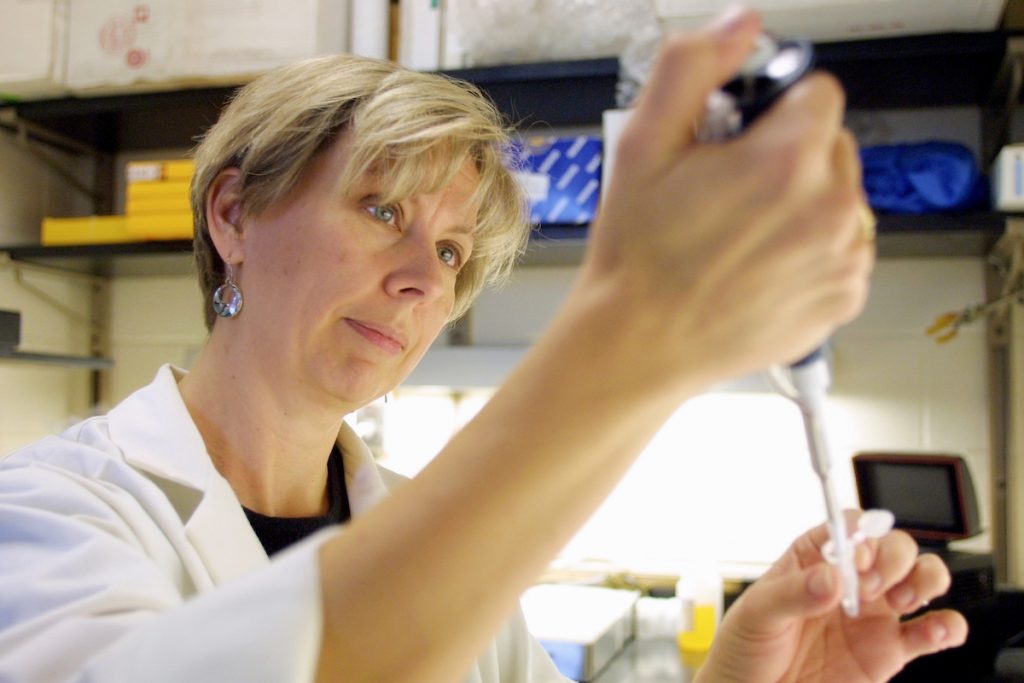 By Susan Fahrbach, Professor and Chair of the Department of Biology

Professor Kathleen A. Kron joined the Wake Forest Department of Biology as an assistant professor in 1991. By the time she retired as a full professor in December 2020, she had spent almost 30 years in service to Wake Forest University and had become a world renowned scholar of plant biology.

Kron’s academic career, for which she became internationally recognized, centered around her research on the Ericaceae family, which includes the heathers, blueberries, cranberries, camellias, azaleas, and rhododendrons. Her studies, and those of her graduate students, combined fieldwork and exploration with DNA-based techniques to reconstruct the evolutionary history of this large and diverse plant family. She pioneered the use of molecular methods to understand plant phylogeny. Her efforts resulted in vastly improved classifications of several groups within the Ericaceae, particularly rhododendrons. Her research in plant molecular biology was consistently funded by the National Science Foundation, and she was highly sought after to lead workshops, serve on editorial boards, and participate in international working groups on plant evolutionary biology.

Kron’s love of the evolutionary history of the Ericaceae was matched only by her love of the beauty of plants and her desire to share this beauty with others, especially students. In addition to developing advanced courses in plant diversity and biogeography, Kathy delighted in teaching a course for non-majors she developed called “Plants and People.” The lab for this course used the Reynolda campus and Reynolda Gardens to help students build, through direct experience, the vocabulary and cognitive framework essential to understanding the dependence of human societies on plants. She also led students in an examination of the great works of American art depicting plants in Reynolda House. This latter experience led her to develop a creative First Year Seminar, “Nature & Wilderness,” in which students examined the categories humans impose on natural landscapes in art and literature. She enjoyed teaching at both the 100- and 700-levels, but she had a special fondness for young students, often inviting classes to her home for festive end-of-semester dinners.

Kron served with great pride as Curator of the Herbarium during her entire career at Wake Forest. Her skill in curating the thousands of archival specimens (including some collected by W. L. Poteat) guided the maintenance and expansion of this small but significant collection, and Wake Forest specimens were shipped to scholars all over the world. She also oversaw the digitization of the specimens. Many undergraduate researchers and work-study students were fortunate to work side-by-side with her in the Herbarium.

Kron mentored a number of doctoral students who are now actively engaged in teaching and research in the United States, Europe, and Colombia. Kathy’s students found in their mentor an exceptionally strong advocate for women in science. Former advisee Dr. Emily Gillespie, Assistant Professor of Biology at Butler University and Director of the Friesner Herbarium at Butler, recalled, “She offered historical context to the past struggles of women in science without dismissing the real challenges that remain so clear today. She transitioned seemingly without any discomfort from being my trusted mentor to my trusting colleague and we continue to enjoy a productive collaboration. Moreover, somewhere along the way she became a wonderful friend.” Gillespie applauded Kron’s ability to stand back and let her advisees assess their personal goals in tandem with their professional ones. She said, ““Kathy was the sort of advisor who generally let you make your own mistakes, learn at your own pace, and make your own decisions. She nudged but she never took the wheel. She knew that not everyone would become an R1 mega-researcher; some of us would go on to become traditional university professors, but others of us would become museum curators, teach at community colleges, work as adjuncts, or even ultimately adopt careers outside the Academy. She was realistic about the availability of opportunities, family responsibilities, and our own personal boundaries.”

Kron was also straightforward about the work required of her students. Former student Tanja Schuster, now a curator at the Natural History Museum in Vienna, remembered: “It was important to Kathy to teach us how to be a well-rounded researcher by having a sound knowledge base in botany and systematics, being familiar with the important principles in our field and applying critical thinking, designing and executing solid studies, successfully writing grants, giving research talks, publishing papers, and being able to withstand criticism. Having had those experiences already as a graduate student was an advantage for the next steps.”

Kron especially loved to take her graduate students to botanical conferences, and often generously sponsored a few days of botanizing before or after the meeting. Schuster further recalled, “During the conference, Kathy made it a point to introduce us to many of her colleagues, which was great for networking and helpful for later collaborations.” And, as was the case with her undergraduate students, Kron and her husband, Paul, always made the entire lab group welcome in their home for dinner parties, opportunities to cook together, and holiday festivities.

Gillespie described Kron as the Renaissance Woman of botany. “Kathy remains a bona fide superstar in our discipline of plant systematics, having published some of the most often cited and revolutionary papers read by modern systematists. She began her academic career just at the leading edge of the ‘molecular wave’ of the late ’80s and early ’90s, re-tooling herself multiple times in order to learn more and illuminate more. Late in her career, when she would have been justified in scrambling less and living a bit more comfortably, she once again refashioned herself as a  phylogenomicist — that is, using 21st century whole genome data to examine long-standing puzzles in plant evolution. In being willing to adapt throughout her career while holding on to valuable work from the past, Kathy brings a deep knowledge of botany, culture, language, geography, art, and literature to her classroom, lab, friends, and colleagues.”

For those in the Department of Biology, Kron’s legacy will be that of an internationally impactful biologist who championed countless future scientists.