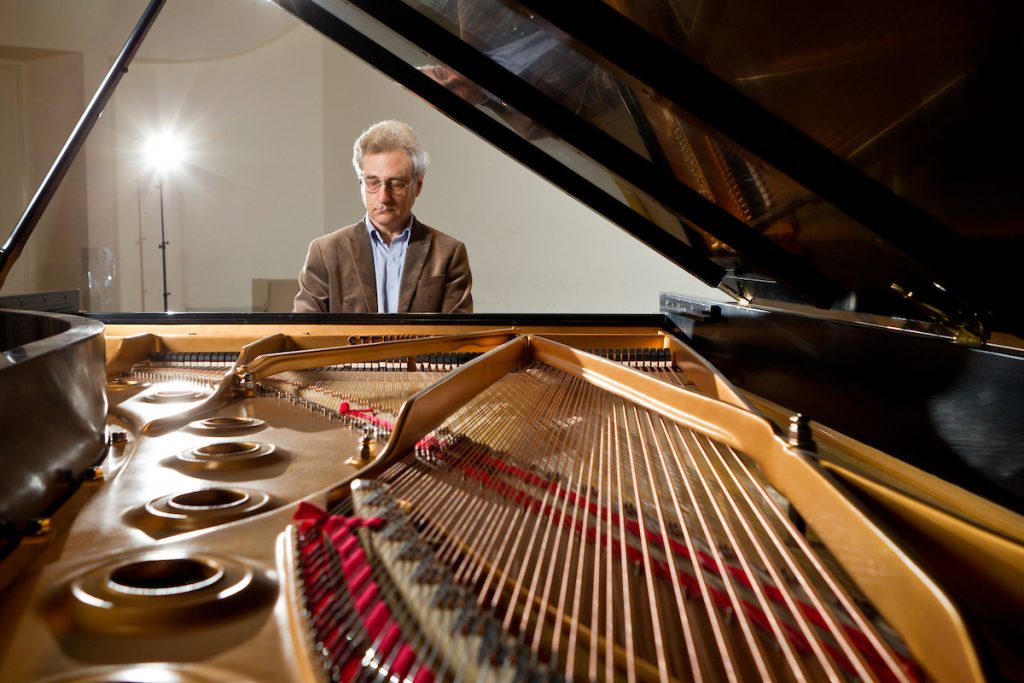 By Peter Kairoff, Professor and Chair of the Department of Music

When Walt Whitman wrote, “I am large, I contain multitudes,” I don’t think he was writing about Louis Goldstein, but he might have been. Louie definitely contains multitudes.

On one hand, he’s the guy from Kenosha, Wisconsin, with a wry sense of humor and a ready appreciation of irony. (We went bowling together one time, but it was mostly done ironically.)

But then again, he’s the brilliant pianist with degrees from Oberlin, California Institute of the Arts, and Eastman, who can toss off a Haydn sonata or the Schumann Kreisleriana with flair (and maybe some irony, too.) He’s also the pianist who’s deeply committed to performing music of our own time. If his Haydn performances are playful and witty, his performances of music by John Cage or Morton Feldman are played with love, sensitivity, and sincerity. Go listen to his recording of Cage’s Sonatas and Interludes for prepared piano (in which bolts and screws and all manner of things are required to be inserted between the strings of the piano to alter the sound) and you will realize that Cage is a masterful composer. A festival of the music of John Cage, which he organized in 2012 to honor the centenary of Cage’s birth, briefly made Wake Forest the worldwide center of Cage studies. And no one could elicit the ultra-subtle rhythmic and tonal gradations of the music of Morton Feldman with more exquisite refinement than he. Audience members at his recitals in Italy, the Czech Republic, and throughout the U.S. will tell you so.

On yet another hand, he’s that life-changing teacher one hears about — the one whom students recall years and decades later as having forever changed their perceptions of the world. An off-the-cuff comment, a quirky observation, a seemingly random question — and minds are forever altered. The fact that he was awarded the Jon Reinhardt Award for Distinguished Teaching is a clue to his lifelong impact on students. In the piano studio, he patiently guides his students through the intricacies of the most complicated compositions, shining light on hidden expressive possibilities and facilitating technical challenges.

It should be no surprise that someone with so many facets was drawn to interdisciplinary teaching. Several summers saw him collaborating with distinguished professors in art, history and literature in intensive graduate seminars known as “American Foundations” at the Reynolda House Museum of American Art.

His students love him, and so do his colleagues. That’s the last of the multitudes that I’d like to mention: he’s been the ideal colleague. Generous with his time, considerate of others, helpful in all the ways one could imagine: collegial, in short.

It’s going to be tough to imagine the Department of Music without him next year, after his many artistic and scholarly contributions to the program and the university for the past 42 years. His are some mighty multitudinous shoes to fill.