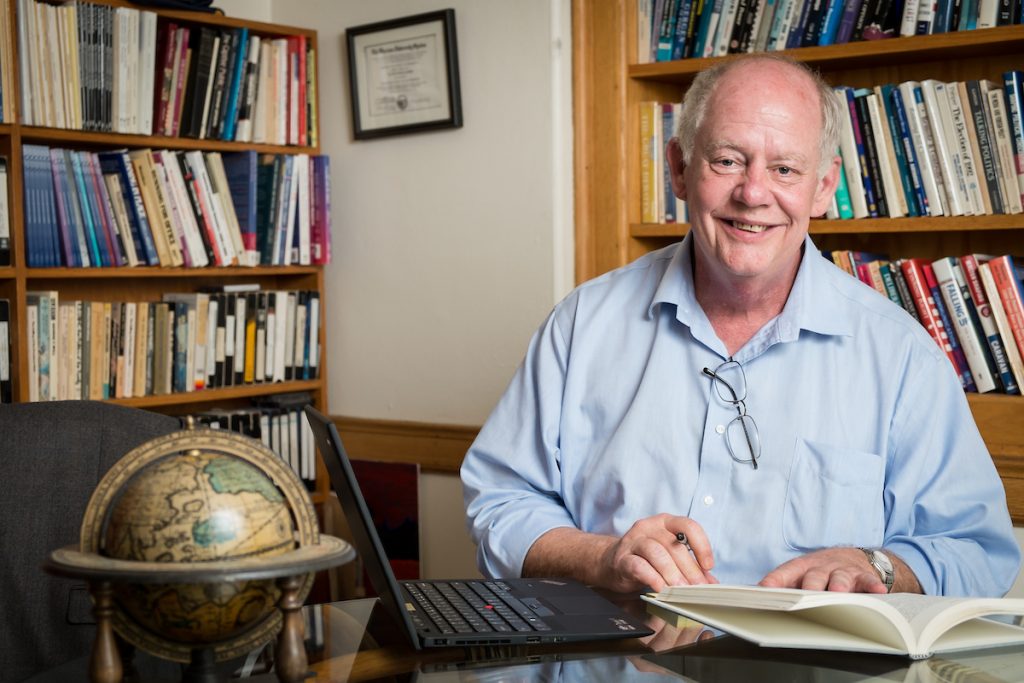 By Jarrod Atchison, Associate Professor of Communication and the John Kevin Medica Director of Debate

History will reflect that a chance encounter in an airport terminal saved the Wake Forest University Debate Team.

The year was 1976. Dr. Michael Hazen, then Chair of the Wake Forest Department of Speech Communication, was en route to the annual conference of the National Communication Association. On his layover, he struck up a conversation with a stranger, Allan Louden, who was attending the same conference. Allan was then the Director of Forensics at Northwest College in Powell, Wyoming, where he had led a team of more than 30 debaters to great competitive success.

This got Hazen’s attention. As fate would have it, Wake Forest was looking for a Director of Debate. Hazen made his pitch and asked Allan to at least apply for the position. Allan did apply and later in the spring had a call from Wake Forest, inviting him for a visit. As they say, the rest is history.

For the past 45 years, Allan has served as a faculty member in the Department of Communication at Wake Forest University. During that period, he earned a Ph.D. from the University of Southern California, as well as tenure and promotion to full professor; he has also served as Director of Debate, as Director of Graduate Studies, and as Chair of the Department of Communication.

As Director of Debate for 30 years, Allan — alongside his dear friend and colleague, Head Coach Ross Smith — rebuilt the debate team and took it to new heights in the college debate community, including guiding the team to its first two National Debate Tournament national championships in 1997 and 2008. Under his leadership, Wake Forest won the award for Best Tournament Host of the Decade in every decade from the 1970s through the 2000s.

Although Allan’s tenure as Director of Debate encompasses too many accolades to list here, the beginning of the story reveals his character and one of his defining attributes: Allan is a program builder. “We are excited you are here, but you deserve to know that the University is considering closing the debate program, retaining a stable director has been difficult.” Those were the first words that Dean Tom Mullen said to Allan when he arrived at new faculty orientation in Fall 1977. Even though debating had started in 1835 (just the second year of Wake Forest College’s existence) and had been suspended only once (during the Civil War), the state of the team in 1977 had Dean Mullen wondering if the program would survive. The 1970s had been a tumultuous period, with multiple Directors of Debate and fewer and fewer debaters on the team.

After growing up on his family’s farm in Montana and investing six years in building a powerhouse debate program in Wyoming, Allan had come east on a one-year contract to a team in need of transition. He could have justified or been invited to pack up after a year and head back to a world that was much more “stable,” to use Dean Mullen’s term. Instead, he took Dean Mullen’s assessment as a challenge. Over the “one-year contract years,” Dean Mullen became a loyal and important supporter.

“As Director of Debate for 30 years, Allan — alongside his dear friend and colleague, Head Coach Ross Smith — rebuilt the debate team and took it to new heights in the college debate community, including guiding the team to its first two National Debate Tournament national championships in 1997 and 2008. Under his leadership, Wake Forest won the award for Best Tournament Host of the Decade in every decade from the 1970s through the 2000s. ” Jarrod Atchison

For more than 30 years, Allan worked with Ross to more than triple the debate budget, expand the coaching staff, increase the number of graduate assistant coaches, develop an undergraduate scholarship program, innovate the college tournament experience, and continue the tradition of excellence and competitive success that has defined the debate program from the start. After three decades of traveling to an average of 18 tournaments a season, he left the position of Director of Debate in 2008, the person to have served longest in that role.

Nonetheless, he has remained an indispensable presence in Wake Debate by continuing to host debate events at his home, delivering lectures on the history of the program, and mentoring the faculty and graduate students.

The debate community has awarded Allan virtually every award it has, including two different Coach of the Year Awards in 1988 and 1995; the 2000 George Ziegelmueller Lifetime Achievement Award, which recognizes individuals who have distinguished themselves in the communication profession while coaching teams to competitive success; the 2005 Lucy M. Keele Lifetime Achievement Award, which recognizes extraordinary leadership and service to the debate community; the 2007 American Forensic Association’s Distinguished Service Award; induction in the 2008 class of Emory University’s Barkley Forum Key Coaches Hall of Fame; and induction in the 2009 class of Wyoming’s Debate Hall of Fame.

Allan has always made clear his belief in the power of argumentation and communication to change the world. He saw that firsthand when he served as the coach for the United States and Japan Debate Exchange in 1995, and invented and coached the Baltic States Debate Tour in 2000. Shortly after the Baltic States tour, he began applying for grants from the Open Society Institute and the State Department to facilitate international opportunities for high school students; from  2004 to 2006, the Southeast Europe Youth Leadership Institute and from 2006 to 2013, the Ben Franklin Transatlantic Fellow Program, guiding more than $2.5 million in grants. Thanks to Dr. Louden’s efforts, hundreds of future leaders from the United States, Europe, and Southeast Asia learned the power of deliberation through life-changing experiences in Winston Salem, Philadelphia, and Washington D.C.

When he was not building programs and chairing the Department of Communication, Allan was researching argumentation theory and political communication with an emphasis on political spots and candidate debates. He has worked as a consultant on presidential, senatorial, gubernatorial, and local political campaigns and is a regular commentator on TV and in print during election cycles. He has published four books, two of which were produced in conjunction with undergraduate students. The first of those innovative collaborations, Journeys Through Washington, stemmed from his term as the 2018 Resident Professor at the Wake Washington Program in Washington, D.C. The second one, Biden vs. Trump: How Political Advertisements Shaped the 2020 Presidential Race, was the result of his legendary course in political communication. His most recent book, Milestones: Defining Lists of Wake Forest Debate, 1835-2022, is the third volume of a three-volume set on the history of the Wake Forest Debate Program. Beyond his publications, Allan has also maintained one of the most comprehensive bibliographies on political communication. It is common to see his bibliography cited in literature reviews across the academy. 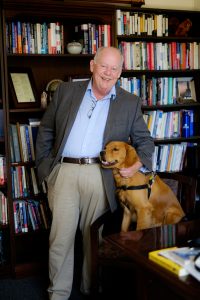 A true teacher, his classrooms are known for his always engaging style and for the enduring presence of his golden retrievers. For more than three decades, Allan’s teaching companions — Montana, Wyoming, and Glacier — have brought joy into the lives of students and everyone else on campus. These dogs have helped countless students struggling with everything from homesickness to the loss of family members. They have been fixtures on campus and known in every building from Reynolda Hall to Facilities.

In one of my many mentoring moments with Allan, I asked him about the keys to success. Among his many insights, he repeated his usual refrain: “Hire the right people and get out of their way.” As much as that statement reflects his characteristic tendency to give other people credit, his wisdom also reflects exactly what Dr. Hazen and Wake Forest got right in 1976. Allan was the right person for the monumental task at hand. Once empowered to lead, he did just that in debate, in his classrooms, in his scholarship, in our department, throughout the University, and in the wider world.

We look forward to seeing Allan — and Glacier — often as he continues his work on the history of the Wake Forest debate team, which—spoiler alert—is in many ways the history of the university itself. But for now, let us celebrate his 45 years of service and thank him for the difference he has made in our lives and those of so many others.