Dr. Brian Gorelick can precisely sing any note at will.

“I always loved watching Brian rehearse. With his perfect pitch and flexible voice, he could pick pitches out of the air and demonstrate beautiful melodic lines for all of the singers, from soprano to bass,” says Dr. Peter Kairoff, Chair of the Department of Music. 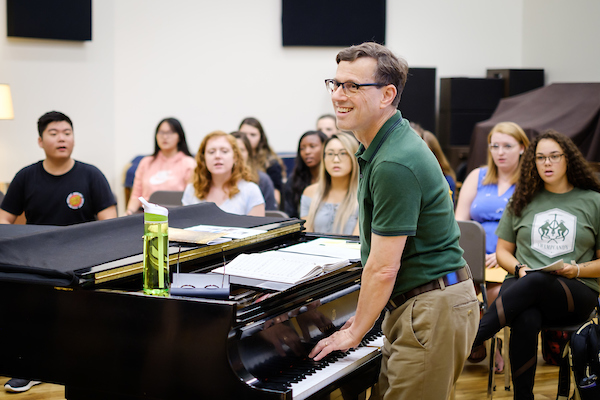 Perfect pitch is an invaluable advantage in a choir leader, a role that demands the ability to connect with a wide range of vocal types and join them together in harmony. But Dr. Gorelick also possesses a rare ability to connect to student performers on a more personal level.

“In a period of life defined by incredible change and personal growth, Concert Choir was one thing that remained the same, and its value as an educational experience — as well as its provision of a reprieve from everything else college life entails — played a crucial role in my Wake Forest experience,” says one of his students, Michael Andrew (’20).

For 36 years at Wake Forest, Dr. Gorelick inspired students to reach for high standards personally, creatively, and professionally. It is not surprising that multiple students went on to become successful choir directors themselves.

“Our school changed considerably from 1984 to 2020. I attempted to always find a way to make participating in choirs relevant to our students. I am certain that recreating expressive music from the inside and being part of an inclusive community of performers makes choral singing relevant throughout time for everyone who has done this at a high level,” Dr. Gorelick says.

Dr. Gorelick received his Doctor of Musical Arts degree from the University of Illinois in 1985, studying with Charles Leonhard and Harold Decker. His Master of Music degree in choral conducting is from UW-Madison. He also holds a Bachelor of Arts in Music from Yale University, where he directed the Whiffenpoofs men’s chorus in 1974. 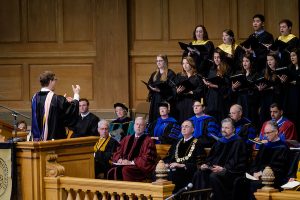 Wake Forest University hosts the Baccalaureate Service for graduates on Sunday, May 15, 2016. Brian Gorelick leads the concert choir in the hymn, “I Will Lift Mine Eyes”.

“Wake Forest has been the perfect place for me to be Director of Choral Ensembles, because of my wonderful colleagues in the Department of Music and so many inquisitive, committed students who have joined the choirs during my 36 years on the faculty,” Dr. Gorelick says.

The choir touched the lives of thousands of students through the decades. It’s reach extended beyond campus as well, as Dr. Gorelick conducted the Wake Forest Concert Choir on the first international tours of any music department ensemble, performing in Austria, Italy, Ireland, Spain, and England.

“The outgoing, joyous singing of our students as they presented their choral repertoire to audiences around the world perfectly embodied our motto of pro humanitate and complemented our school’s valuable Global Studies program,” Dr. Gorelick said.

Each of these high-profile performances was the result of countless hours behind the scenes, working and rehearsing to get the music just right.

“He knows how to make every second count in rehearsal, and every gesture count in performance. He was devoted to the students in his choirs, and they to him,” says Dr. Kairoff.

“The outgoing, joyous singing of our students as they presented their choral repertoire to audiences around the world perfectly embodied our motto of pro humanitate and complemented our school's valuable Global Studies program.” Brian Gorelick

“In rehearsals, he created a wonderful environment for each of us to foster our abilities to work together towards a common goal.” Michael Andrew ('20)

Andrew recalls one small but memorable occasion when rehearsal was not going very well, and the Concert Choir was having serious difficulties with some of their repertoire’s most challenging passages. In an uncharacteristic moment, Dr. Gorelick stepped away in frustration. Then he took a drink of water, walked calmly back to center stage, and smiled as he addressed the choir.

“What happened next was a life lesson in resiliency and good leadership,” says Andrew.

He reminded them that when mistakes seem to be piling up and we begin to add pressure to ourselves, the best thing to do is to strip everything back down to fundamentals, and most importantly be confident in our own musicianship. He told them that he had every belief that we would pull off our best performance of the semester the next night, and nothing that had gone wrong in that previous half hour or so had changed his mind.

“His putting us at ease changed the rehearsal environment almost on a dime, and it ultimately became one of the best dress rehearsals that I can remember us having … it captures the way he always seemed to be one step ahead of our group’s mental pulse and knew exactly what to say at the right moments to convey his confidence in our abilities. It reinforced our belief that we all had each other’s backs and he had ours.” 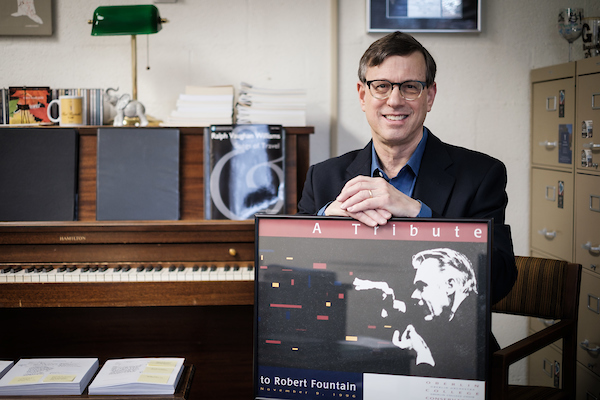 Brian Gorelick, professor of music and director of the Wake Forest choral program, poses in his office with a portrait of his mentor, Robert Fountain of Oberlin College, on Thursday, January 30, 2020.

Individual small moments of striking the pitch-perfect note in this way combined over time into a rich 36-year-long choral tapestry. And Dr. Gorelick can justly be proud of the beauty and inspiration he leaves at Wake Forest.

Dr. Kairoff agrees, saying, “The total commitment to students on a personal level that WFU’s faculty practices is one of the things that makes Wake unique, but even within the bounds of our campus, Dr. Gorelick’s unwavering support of and immersion in our development stands out. Brian has been a supportive colleague and good friend, who has contributed immensely to the musical life of the university and the wider community. He will be sorely missed.”