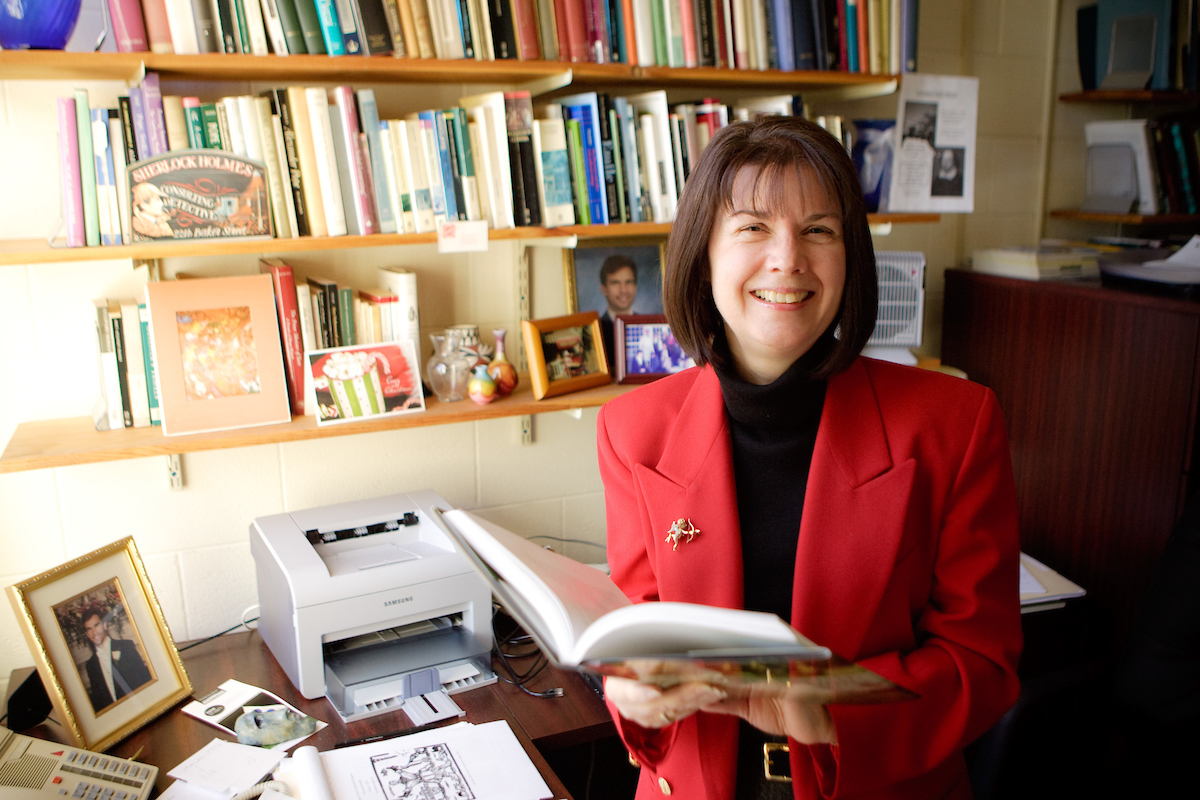 By Jessica Richard, Chair and Associate Professor of English

Everyone who knows Claudia Kairoff can identify her from afar by her joyous laugh. We hear that laugh ringing through Tribble Hall when she is teaching classes or talking to colleagues. Claudia’s big laugh symbolizes the way she has done her work across so many facets of Wake Forest University for 36 years: with joy, humor, and a healthy appreciation for satire, which just happens to be one of the favorite modes of the eighteenth-century British writers she has spent her career researching and teaching.

Even as she laughs, she has produced serious and long-lasting scholarship on the life and works of women poets of eighteenth-century England. Her first book, Alexander Pope and His Eighteenth-Century Women Readers (1994) analyzed in rich detail how a range of women poets constructed their work in response to the era’s most celebrated poet. She went on to publish a whole book on one of those women poets, Anna Seward. That book, Anna Seward and the End of the Eighteenth Century (2012) was the first modern book-length study of one of the most famous women poets of the period who had never received the kind of detailed scholarly attention that Claudia gave to her poetry. These two books alone would be a major contribution to the field for one career. But Claudia has done much more. She co-edited with Jenny Keith of UNCG on The Cambridge Edition of the Works of Anne Finch, Countess of Winchilsea in 2022. Anne Finch has long been understood to be a major poet of the early Eighteenth Century, but her complete works had never been published nor given high-quality scholarly editing. Poring over poems, many of which only exist in manuscript form in far-flung archives in Washington D.C., London, Chicago, and elsewhere, Claudia and Jenny have with this definitive edition produced a work of scholarship that will literally never be supplanted. No one will ever need to produce another edition of Anne Finch’s work. As a recent reviewer wrote, “The editors, Claudia Kairoff and Jennifer Keith, have completed with astonishing thoroughness, sensitivity, and seriousness one of the landmark pieces of eighteenth-century scholarship of this century.” He went on to declare this project “a triumphant act of feminist intervention and recovery.”

I haven’t even mentioned her long list of articles and reviews published, nor her many conference presentations and lectures given over the past 36 years, nor her awards (though I must remind you that she won a major NEH grant for the Anne Finch project).  I will also note that she was honored to deliver the annual Poteat Lecture here at Wake Forest in 2017. Though she approaches retirement, Claudia is by no means done making important scholarly contributions to our field. She has a complete book manuscript, a critical study of Anne Finch’s poetry, which she expects to go under contract with a university press within the coming year, and numerous articles in progress.

Countless students have been infected by that laugh with Claudia’s joy for eighteenth-century British poetry and for literature more broadly. Whether here on campus, in the Worrell House in London, in Casa Artom in Venice, or on the EuroTour, Claudia has mentored students in, as one of her courses is titled, “Slow Reading,” savoring the words of her favorite writers.

So many of us have heard Claudia’s laugh as she ably executed numerous administrative roles at Wake Forest. As Associate Dean for eight years, one of her many notable contributions was instituting a mentorship program for junior faculty, with particular attention to women junior faculty. She chaired the English Department, served as Interim Chair of the Art Department and Interim Chair of the Theatre Department, and headed more campus initiatives than I can list here, initiatives that always had at their heart making the campus a better place to work, to learn, and to think and produce scholarship. She has always been an exemplary campus citizen. As Professor Barry Maine remarks, “Claudia Kairoff is not only an award-winning teacher and nationally recognized scholar in her field, but she has been a model citizen and servant of the College during her long and distinguished career at Wake Forest. She has brought to every leadership role she has been asked to fill the same dedication, collaborative spirit, organizational skills, and attention to detail that characterizes her work as a scholar.”

Dean Franco, Palmer Professor of Literature, notes, “Among Claudia’s great gifts to her colleagues was her daily expression of joy for her work. That’s been evident in her much-remarked upon laughter of course, but it’s also been there in the genuine interest and enthusiasm she shows for all dimensions of her work: She’s always eager to share a story about her class or hear your own, she’s keen to discuss research both in and beyond her field, and she’s always quick to find the humor (that laugh!) in the basic business of operating a department. Combined with her outstanding achievements as a scholar and teacher, Claudia’s manifest pleasure in doing the work was infectious. How could you not be happy to be on campus, in Tribble, when Claudia was around?”

Being Claudia’s junior dix-huitiemiste colleague for 20 years has been a joy for me.  From the moment I arrived on campus to interview for this job, she welcomed me warmly. She offered me support and friendship as I made my way along the tenure track, through the challenges of the tenure process, and as my Associate Chair during my first term as Chair. Her advice has always been unerring and invaluable. I treasure memories of incredible meals, the best wine, and, of course, lots of laughter at her house with her wonderful husband Peter, watching eighteenth-century costume dramas together, attending classical music concerts, talking clothes, shoes, jewelry, shopping, and travel. I’m more grateful than I can say that my career was grounded in her joyous collegiality and especially her friendship.

Eighteenth-century poets loved satire, but they were a bit anxious about laughter.  Laughter can be cruel, disruptive, unseemly, especially (so thought eighteenth-century British writers) women’s laughter. Unfortunately for them, those eighteenth-century poets whose work Claudia knows so well never had the chance to hear her pealing laughter and to see all that she built and affirmed with such commitment and joy. How lucky have we been here at Wake Forest to hear her laughter and to benefit from her celebratory scholarship, teaching, administrative acumen, dedication, and friendship.