By Peter Kairoff, Chair and Professor of Music

When David Hagy conducts, you can see how much he loves the music being played under his direction. Graceful gestures trace the outlines of the emerging melodies, a quick flip of the baton indicates when an instrument should begin, and meaningful glances to the various sections of the orchestra communicate, inspire, and cajole the players to make magic out of the dots and lines on the pages of their scores.

You can also see how much Maestro Hagy loves the students under his direction, and how much they love him. He knows that few if any of the members of the Wake Forest Orchestra will go on to careers in music, and yet he treats each of them with respect, and with a warm yet demanding approach that elicits a level of playing that at times surprises even them. He has a clear impression of how a piece of music should sound — an ideal that is not always realized, but which serves as a beacon toward which they orchestra can strive and sometimes even surpass. Like a great coach, he knows the capabilities of each of his players, pushing them to new heights, and the students love him for it. 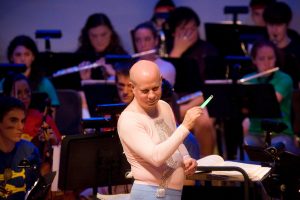 They also love him for his impish sense of humor, not to mention his willingness to dress in outrageous costumes. David started a wonderful tradition at Wake Forest — a Midnight Halloween Spooktacular — in which the orchestra members dress in costume; evocative music is played, from John Williams to Modest Mussorgsky and everything in between; and some outrageous plot serves as the scaffold (no pun intended) for a hilarious and raucous late night. Inevitably the maestro himself — in the guise of a character from Harry Potter or Lord of the Rings or you name it — comes to a bad end. It’s become a highlight of the calendar, and Brendle Hall is always packed.

Playful, warm, and beloved, David nevertheless came to Wake Forest in 1995, with some serious gold-plated credentials in music, including master and doctoral degrees from Yale, undergraduate study in violin and conducting at the University of Indiana, and a long list of professional engagements across the country. He has guest-conducted a wide range of orchestras and continues to serve as the Music Director of the Salisbury (N.C.) Symphony, where he has likewise earned warm gratitude and multiple civic honors, including the Keys to the City, Distinguished Citizen of the Year, and so on.

Two other passions of David’s should be mentioned: musical theater and Venice. David has a real passion for, and deep knowledge of, American musical theater, and enthusiastically (how else?) led the biennial musical theater productions that are a regular collaboration of the departments of Music and Theatre. He also frequently taught a course on the history of the musical, which allowed him to share his deep love for Sondheim, Loewe, et al., to generations of grateful students.

Another real passion for David was the city of Venice, and in particular, Casa Artom, the Wake Forest center on the Grand Canal of that magical city. He cherishes the memory of having served as professor in residence at Casa Artom for three different semesters over the years, and the close friendships he formed with the students those semesters have endured, with plans underway for 20-year reunions of each of the respective groups in Venice coming up.

Conducting, teaching, musical theater, Venice, outrageous costumes — the through-line that connects these many facets of David’s career is a joyful warmth and loving spirit, of which we at Wake Forest have been the grateful recipients for 27 years. I know there will be many wonderful codas to David’s career once he leaves the podium at Wake Forest, but his will certainly be a tough act to follow.