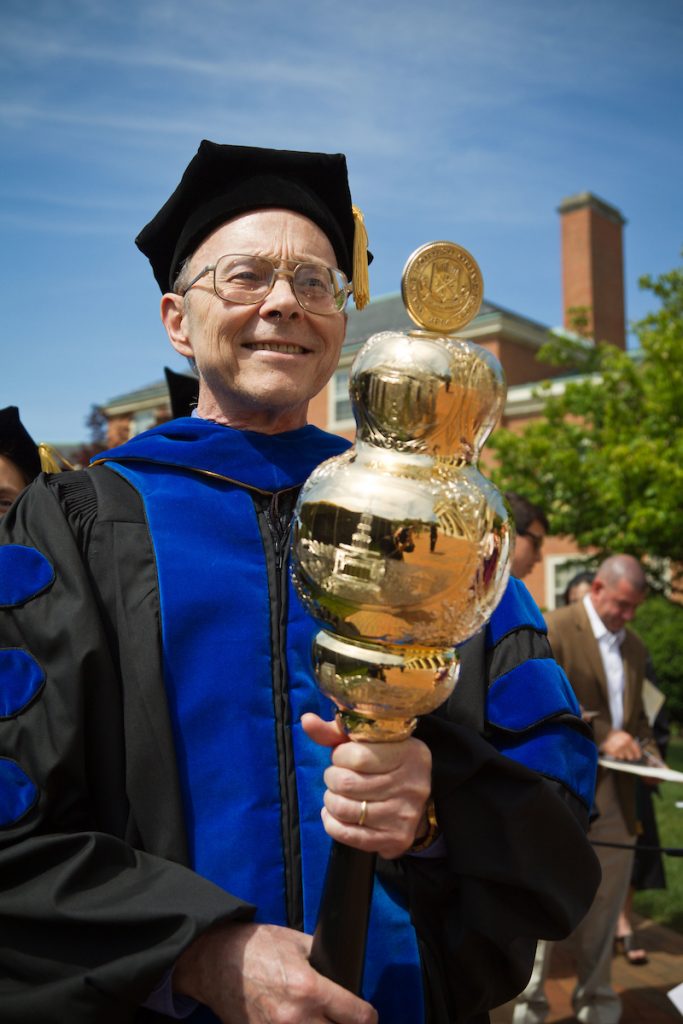 By Monique O’Connell, Chair and Professor of History

Mike Hughes has been a central part of the Department of History for more than three decades. After receiving his Ph.D. at the University of California at Berkeley, he arrived at Wake Forest in August 1984, and has taught European history in our department for the past 37 years. His courses involve modern European social and political, and military history as well as his area of specialty, 20th century Germany. One of his most unique courses is a team-taught seminar with Dr. Rebecca Thomas, Professor of German, on the art, theater, politics, and culture of the Weimar Republic.  Thomas says, “ It was one of the great pleasures of my career to team-teach ‘Weimar History and Culture’ with Mike. Mike’s seemingly endless knowledge of Weimar politics, economics, film, visual art, and architecture was always the backbone of the course. He was a great teaching partner: always smart, prepared, rigorous, and open to other opinions and approaches. I will very much miss watching him groove (with a restrained toe tap) to Ella Fitzgerald belting ‘Mack the Knife’ during the final Weimar Lives session.”

Mike has a distinguished record of research on German economic and political history. His most recent book, Embracing Democracy in Modern Germany. Political Citizenship and Participation, 1871-2000 is a great example of public-facing scholarship that synthesizes decades of specialist research to argue that democracy — in Germany and elsewhere — cannot be a story of overcoming adversity that culminates in a happy ending; it is an ongoing, open-ended process whose ultimate outcome remains uncertain. His two earlier books have also engaged with fundamental questions about the German state — his first book, Paying for the German Inflation, contributed to the debate about the nature of politics in Weimar Germany by closely examining attempts to stabilize the country’s currency in the late 1920s. His second book, Shouldering the Burdens of Defeat, moved forward in time to examine the devastating aftermath of World War II, analyzing West Germany’s efforts to redistribute the costs of war and defeat among the citizenry. 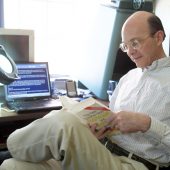 Mike upholds the departmental ideal of an intellectual community. Simply put, Mike is curious about what other people are working on and engages folks in conversation about their own research at the photocopier, in the hall, in the lounge, or he seeks them out in their offices to ask questions about their work or areas of expertise.

Monique O’Connell, Chair and Professor of History, says, “One of the most interesting conversations about feudalism I’ve had in recent years was when Mike swung by to ask about developments in the field, and we ended up talking for an hour about how historians have been thinking about this concept.”

Many colleagues recounted similar experiences, showing the way Mike has gone out of his way to support new faculty as they developed their teaching and research agendas. Visiting Assistant Professor Luca Provenzano was among the many young faculty who benefitted from Mike’s mentorship at the early stages of their careers. Provenzano says, “This is my first academic position since I earned my doctorate at Columbia, and opportunities to strategize with Professor Hughes about new course content and receive feedback about my work have been crucial. Mike’s scholarship on modern Germany intersects my own research on protest movements and policing since 1945, and I learned so much from our conversations.”

On a broader scale, Mike has consistently demonstrated a strong commitment to the principles of faculty governance and has a distinguished record of service to the department, College, and University. He served as department chair from 1999 to 2003 and was elected by his colleagues as Chair of Chairs, AAUP President, and President of the University Senate, indicating the respect and esteem of his peers.

Simone Caron, Professor of History, writes, “Michael Hughes exemplifies as few have done the teacher-scholar model combined with a strong commitment to faculty governance and service to the University. His students greatly respect his dedication to teaching in the same way that colleagues in the profession respect his significant contributions to German history in his numerous books and peer-reviewed articles. Despite the enormous amount of time and energy devoted to teaching, research, and writing, Mike still found time to take on onerous roles in faculty governance, serving as Chair of the Department of History for four years, President of the WFU chapter of the American Association of University Professors, and President of the University Senate. He has served as a role model for all of us to emulate, and we will miss his many contributions to the intellectual culture on our campus.”