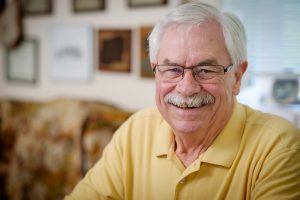 Dozens of empty champagne bottles cover the top shelf in Ray Kuhn’s office inside Winston Hall, leaving no doubt that he has had plenty to celebrate over the past half-century.

Each bottle of Tott’s or Korbel champagne has signatures covering its label. The signatures belong mostly to Kuhn’s former Biology students at Wake Forest University.

As a tradition, Kuhn throws a party for each of his students who receives a Master’s degree or a Ph.D. Two bottles of champagne are purchased, one that Kuhn gives to the graduating student and the other that goes on his shelf after everyone has signed it. 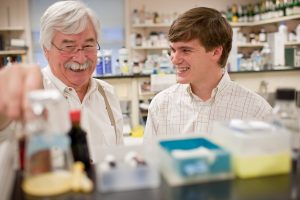 The 75-year-old Kuhn is like a beloved character out of a Mark Twain novel. He’s a brilliant, wisecracking, suspender-wearing former truck driver from the South who never intended to go to college but has spent the past 50 years at WFU researching infectious diseases.

“Everywhere I go people want me to see patients,” Kuhn said, “and I tell them, ‘Listen, I’m a mouse doctor. That’s it.’”

When Kuhn was hired in 1968, the Department of Biology consisted of 11 people, didn’t offer a Ph.D. program, and was known more for its teaching than its research. Needing a job after graduate school, Kuhn agreed to join the department. 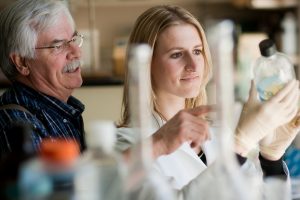 In the five decades since then, Kuhn has “retrained” himself to become an internationally recognized immunobiologist and a leader in the analysis of host responses to parasites.

His impact on the WFU community is evident by the long list of former students who have gone on to have prestigious careers of their own.

On May 26, around 75 of Kuhn’s former students will reunite at a nearby convention center and likely pop a few more bottles of champagne at a retirement party for him. After mentoring 14 Ph.D. students over the past 50 years, Kuhn is retiring from WFU.

“Ray has always been interested in fostering independent thinking in those he mentors. It's therefore no surprise that he has mentored several generations of successful immunoparasitology researchers. But his generous spirit touched many other lives at Wake Forest.” Susan Fahrbach, Reynolds Professor of Developmental Neuroscience and Chair of the Department of Biology

While spending several months every year in South America, Kuhn has studied Cholera, Chagas disease, and lately a fungus that is wiping out frogs and salamanders. He helped develop the diagnostic test for Cysticercosis, a horrific disease caused by the eggs of the pork tapeworm. 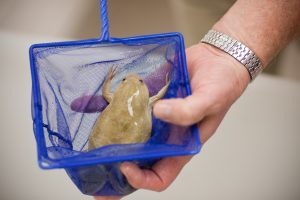 In 1974, Kuhn founded the Fancy Gap Immunoparasitology Workshop that annually attracted researchers from across the globe to southern Virginia.

Not bad for a guy who didn’t plan to go to college and instead worked as a mechanic at a Ford dealership after graduating from high school.

Born on an Air Force base in Mississippi and raised in rural Georgia, Kuhn worked as a mechanic until his brother helped him get a job driving a truck out of Atlanta. 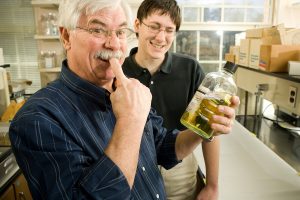 For 16 months, Kuhn delivered sprockets, pulleys, and large leather belts used in textile machines within 100 miles of Atlanta. However, when he lost out on a promotion to a man who had gone to college for a year, Kuhn reconsidered his plans to not go to college.

“It’s really interesting how circumstances do that,” Kuhn said when asked if his career might have turned out differently had he received that promotion. “My father had encouraged me to take courses at night at Georgia Tech, which I did and did very poorly. … But I fell in love with it.”

The professor of a Contemporary American Social Life course at Georgia Tech had issues with Kuhn, going so far as to challenge the 19-year-old part-time student to a boxing match during a heated class argument.

Still, the professor told Kuhn that he had to go to college. Kuhn took his advice, quickly earning a Bachelor’s degree from Carson-Newman University and then a Ph.D. from the University of Tennessee. 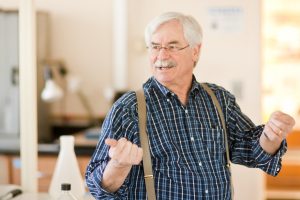 As unlikely as Kuhn’s career has been, he has recognized the potential in others. He took a particular interest in an 18-year-old named Rick Lewis, who got a job cleaning mouse cages in WFU’s Biology lab instead of going to college.

When Kuhn learned that Lewis painted, he asked to see some of the teenager’s work.

“When he saw the paintings, the first thing he asked me is ‘Why aren’t you in college?’” Lewis told Illinois State University in a 2016 interview. “It was that question that changed my life.”

Lewis spent the next four years cleaning mouse cages at WFU while earning a Bachelor’s degree in Art from Winston-Salem State University. After Lewis graduated, Kuhn told him that he needed to do more and go to graduate school.

Lewis again listened. He sold everything he owned, boarded a Greyhound bus, and earned a Master’s degree from Illinois State. Lewis retired as Associate Dean of Students at Illinois State in 2016.

“A former colleague of Rick’s at Illinois State wrote me that ‘hundreds, if not thousands, of lives have now been changed because Ray Kuhn took an interest in someone cleaning animal cages,” Fahrbach said. 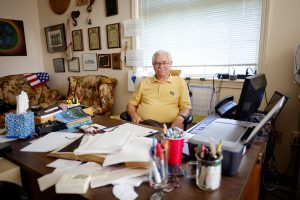 Kuhn said he will keep his office in Winston Hall for a few more years after his retirement and continue writing. When it is finally time for him to leave, he intends to take the empty champagne bottles off his shelf and bring them home with him.

“[My former students] have success stories that make me feel wonderful, and they’ve done what a professor hopes they would do. They have exceeded my capabilities as a professor and scientist,” Kuhn said.

“That is my success.”

The Clark P. Read Mentor Award from the American Society of Parasitologists