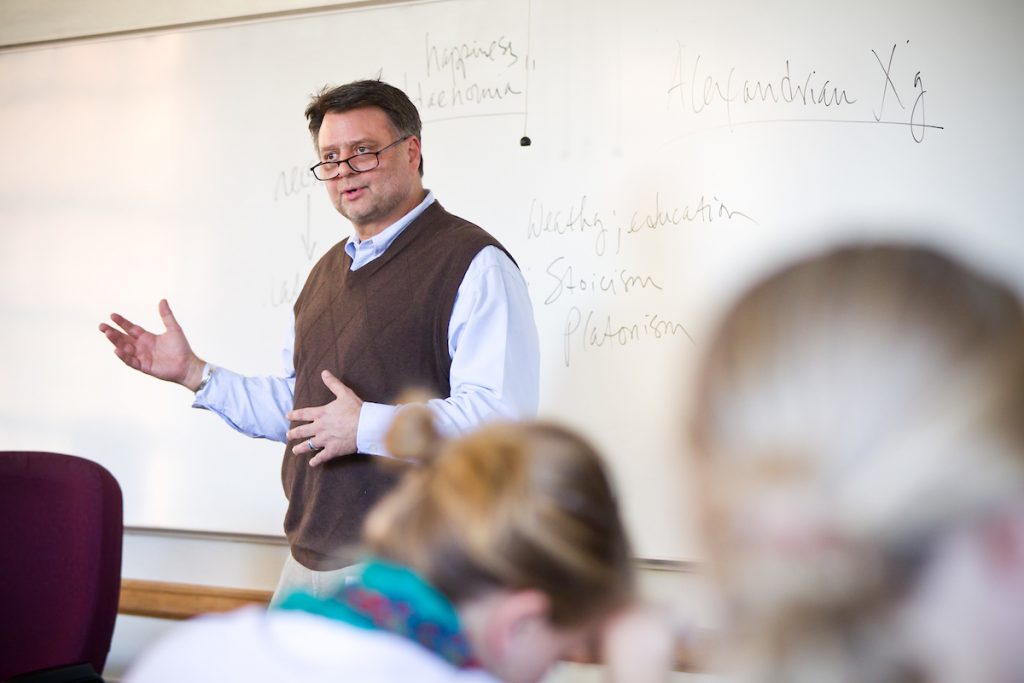 By Tanisha Ramachandran, Director, Religion and Public Engagement and Associate Teaching Professor of the Study of Religions

After 37 years of what can only be described as a distinguished career, Stephen B. Boyd, John Allen Easley Professor for the Study of Religions bids farewell to a place he entered as Assistant Professor of the History of Christianity with a newly minted Th.D. from Harvard Divinity School in 1984. From the onset, Steve solidified his role as an innovator in our discipline. Fred Horton, Professor Emeritus, Department for the Study of Religions, recalls Steve’s impact on curriculum upon entering the department.  “I remember how excited we were at Steve’s coming. Steve transformed the study of Christianity emphasizing the historical nexus of the church and the church’s setting within society. This emphasis in his teaching also led to his own involvement with the social engagement of the church and university.” 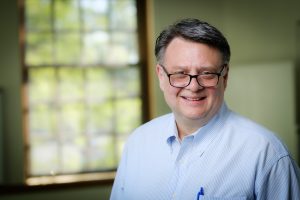 While Steve’s career is overflowing with teaching awards, numerous articles, books, and service to the institution, what makes his career extraordinary is his commitment to service and justice, which extends far beyond the academy. I asked Steve what unifies his vast research and teaching areas to which he responded: Pilgram Marpeck, the sixteenth-century Anabaptist subject of my dissertation, believed there is an inextricable connection between righteousness, or justice, before God and righteousness or justice before humanity. One necessarily involves the other. It is a variation of the assertion of the Johannine author, “Those who say, ‘I love God,’ and hate their brothers or sisters, are liars; for those who do not love a brother or sister whom they have seen, cannot love God whom they have not seen.” 1 John 4:20. I believe that is true. Much of my work explores what that means to love all of our sisters and brothers, of every color and culture. Paolo Friere, who shaped Catholic liberation theology said he wrote his formative, Pedagogy of the Oppressed, with the hope that it would further “…the creation of a world in which it will be easier to love.”

Themes of righteousness, justice, and love pervade Steve’s life and career. Mary Foskett, Wake Forest Kahle Professor and colleague in the Department for the Study of Religions, notes how Steve integrates these commitments into his teaching. “A scholar whose work in the classroom was as engaged as his community service, Stephen Boyd’s teaching both in and beyond the classroom was born of his passion for critical thinking in the service of justice. His work, which throughout his long career consistently reflected his commitment to teaching whole persons and serving whole communities, has truly left an indelible mark across Wake Forest University and the City of Winston-Salem. Beloved by generations of students who were inspired and shaped by their teacher and mentor, he was awarded the Reid-Doyle Prize for Excellence in Teaching, the Don Schoonmaker Faculty Prize for Community Service, and the Building the Dream Award.”

“Dr. Boyd is one of the most empathetic and brilliant people I have ever been blessed to know. I learned so much from him as a student, but more importantly as a person. He taught me things about social justice and personal character that are so invaluable, and he has provided mentorship for me along the way.” Morgan Briggs, former student

Steve’s service accomplishments reach far beyond the academy and produce real social change. He recalls two instances that stand out: “I joined interfaith and interracial coalitions to overturn the wrongful convictions of two African-American men from Winston-Salem—Darryl Hunt and Kalvin Michael Smith. Both spent more than 19 years in prison. As a part of the Religion and Public Engagement Program, we developed the Feather and Stone Exchange Program with the San Carlos Apache Tribe which has included six trips (with more than 50 WF students, staff, and faculty) and visits to WF by Tribal Council members and San Carlos students.” In all of these endeavors, he includes students in order to mentor and demonstrate real-life application of what he teaches.

Former student Randy Paris confirms these sentiments stating, “Dr. Boyd was (and is) a light to so many of us. With his light, he helped me see what real inquiry looks like. In his light, I saw what real service looks like. In the shadows he cast are many like me who saw Dr. Boyd as an igniter for justice. As a causer of good trouble.”

His colleagues in the department for the Study of Religions comment on his generosity and commitment to justice. Kimberly Wortmann, Assistant Professor of Islam, says, “Since my arrival at Wake Forest, I have been impressed by Steve’s ongoing pursuit of justice and his efforts to hold our department and College community to the highest standards of equity and accountability. He works tirelessly in pursuit of these ideals, and his example teaches and inspires.” Annalise Glauz Toudrank, Assistant professor of Judaism, notes the impact Steve’s scholarship and teaching have had on the discipline of Religious Studies. “I admire Steve Boyd because he speaks truth to power both on campus and in the community. As Director of the Religion and Public Engagement program for many years, he tirelessly showed students that religious studies matters because of their actions in the world.”

Lucas Johnston, Associate Professor of Religion and the Environment, affirms the revolutionary impact of the Religion and Public Engagement concentration established by Steve and Ulrike Wiethaus, Professor Emeritus, “His leadership of the Religion and Public Engagement program opened my eyes to a way of teaching that was new to me and life-changing for the students. As I took over the leadership of RPE, he encouraged and gave counsel constantly. Finally, his passion for justice issues of all kinds, from indigenous land rights to community-level incarceration advocacy, was inspiring and instructive.” Leann Pace, Associate Teaching Professor, comments on the firm commitments Steve brings to all his endeavors. “When I think about my experience of working with Steve, I am always reminded of his passion for connecting activism outside the classroom with his teaching. In department meetings, Steve is always a tireless advocate for our students as we think about department policy and curriculum. His care and passion for the Wake community and the wider world is evident in everything he does.”

Jarrod Whitaker, Professor of Ancient India, recalls how “[Steve] has been a constant supporter of his career and a great mentor. As chair, he substantially impacted the department’s identity and trajectory. At the university and wider community levels, his tireless work for justice is profound. He will be missed in the department, especially his raucous and infectious laughter.” Steve’s generosity and commitment to mentoring mentioned in numerous accolades from his colleagues. Segun Ilesanmi, Wake Forest University Distinguished Professor of Religious Studies writes:  “Steve Boyd is one of the most unselfish and public-spirited people I have ever met. As the Chair of the Search Committee that recruited me, he offered to be my faculty mentor when I joined the department, and he spared no time to ensure that I learned the ropes from day one. He genuinely wanted me to succeed as a teacher-scholar by affording me every opportunity he thought would advance my career, including opportunities to serve the greater Winston-Salem community. He enabled me to confront and overcome my own self-doubt about leadership abilities. He models leadership by example, both in and beyond the department.”

“His leadership of the Religion and Public Engagement program opened my eyes to a way of teaching that was new to me, and life-changing for the students. As I took over leadership of RPE, he encouraged and gave counsel constantly. Finally, his passion for justice issues of all kinds, from indigenous land rights to community-level incarceration advocacy, was inspiring and instructive.” Lucas Johnston

Jay Ford, Professor of East Asian Religions, emphasizes how Steve has counseled colleagues through different stages in their career. “I had the privilege of having Steve as a mentor when I joined the department, later when I followed him as department chair, and again in faculty governance when we served together on the Faculty Senate. Steve was (and remains) a remarkably astute and tireless leader in the fight for justice and equity, whether on behalf of students, faculty (AAUP), or marginalized populations in Winston Salem and across the nation. He is, in short, a true exemplar of his own prophetic Christian tradition.”

Colleagues from outside the Department for the Study of Religions mention how Steve has impacted the College and served as an advocate to faculty in various departments. Kristina Gupta, Associate Professor of Women’s, Gender, and Sexuality Studies, discusses these numerous contributions, including Steve as founding member “of Wake Forward, an organization that has become so important to my own experience at Wake Forest. He also supported me during a professionally difficult time in my life. I am deeply grateful to Steve for giving me one example of the type of senior faculty member I aspire to be.”

When I took over as director of Religion and Public Engagement, I not only benefitted from his generous mentorship but also had the pleasure of co-teaching REL 332/632, Religion and Public Engagement, with Steve. I saw firsthand the profound effect of Steve’s teaching style, knowledge, and commitment to justice and social change on our students as he engaged with issues of race, religion, and gender with integrity and accountability. Thank you, my dear friend, for embodying pro humanitate as an activist teacher-scholar. We look forward to seeing the impact you make in this next stage of life. Godspeed, Preacher man, we will miss you!