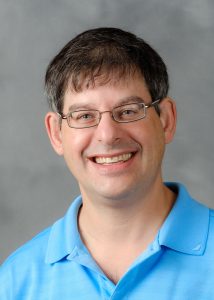 With suggestions from the class, Strumpf set up markets on everything from how well would Wake Forest University’s soccer teams do to would Republican candidate Roy Moore remain in the Alabama Senate race to the end.

His students spent the Fall 2017 semester using their cell phones to “buy” and “sell” on the fake markets ­– all while Strumpf was blocked from seeing how individual students were trading.

Strumpf, WFU’s new Burchfield Presidential Chair in Political Economy, even created an online market for the class to try to predict his average teacher evaluation score at the end of the semester.

“I [would] tell them, ‘Look, if I’m teaching and this is just not a good class, sell,’” Strumpf said, sitting in his Kirby Hall office that contained boxes he hadn’t had a chance to unpack since arriving on campus several months ago.

Strumpf enjoys collecting and sifting through data. Unlike other economists, he prefers to research topics that are considered taboo, unpopular with industry insiders, or not understood by colleagues his own age.

On an office wall, Strumpf displays an angry letter he received from a record label executive who took issue with his extensive research on if online file sharing of music affected record sales in the early 2000s.

“Our new Presidential Chair brings with him a level of experience and expertise that raises the bar of excellence that we set for ourselves in the department,” said Sandeep Mazumder, Associate Professor and Chair of WFU’s Department of Economics.

Strumpf joined the department in August, bringing his passion for analyzing economic issues that address broad questions about intellectual property. His energy is evident in the way he talks about studying markets that predict how a person might vote or shop.

“Dr. Strumpf was unique to me in the sense that his assignments were challenging, but he cared more about my learning than test scores,” said Nick Reitzel, a junior Economics major who took Strumpf’s Public Finance class in the fall. “This made him a very effective teacher, and his courses should serve as a model for others at Wake.”

Strumpf said he was honored to receive a chaired position from WFU, and the opportunity to join a dynamic Economics department attracted him to Winston-Salem.

Despite not being much of a sports fan, Strumpf became fascinated with the ways that sports betting works. No Las Vegas casino would share its records with him, so he shifted his focus to illegal sports betting.

With the help of a friend in a New York district attorney’s office, Strumpf collected the records of bookmakers who had been arrested in the 1990s. One of the items he received was a magnetic computer tape that a bookmaker had used to track his action.

Strumpf discovered the bookmaker had records showing he processed $250 million a year in illegal bets.

“I’m mainly interested in how these markets work and that they forecast well. I’m not so much [interested] in the specifics,” Strumpf said. “It happens to be on sports, but if I got the same betting records that I had and it was on onion prices I’d probably be just as interested in it.”

Along with being a cutting-edge economist, Strumpf was also a card-carrying member of the Screen Actors Guild, thanks to a national commercial he appeared in as a kid with his family in 1974 for the fruit-flavored drink Tang.

“The other truth in advertising,” Strumpf said, “we don’t drink Tang.”