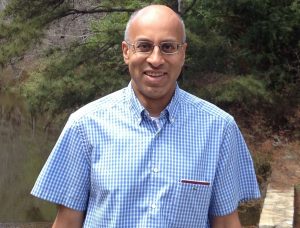 Akbar Salam is a minimalist when it comes to conducting his Chemistry research, relying on blank sheets of paper over a laboratory equipped with high-tech gear.

He tends to work on quantum mechanics at a table either in his house or his temporary Winston Hall office. He’ll solve advanced math equations on paper for up to 10 hours a day for several days in a row.

Salam prefers dead silence, minimal distractions, and natural light as he calculates the rate at which atoms and molecules absorb light. His current research involves determining the transfer of energy between three particles instead of the standard two-particle equation.

“You have to use mathematics as the language to describe nature because it’s precise. Our words simply aren’t good enough.” Akbar Salam

“I sit and basically have blank sheets of paper and just start deriving something, but I would have already in my mind thought about what it is I want to calculate,” said Salam, a Wake Forest University Professor who teaches mostly undergraduate-level Chemistry classes.

As the only theorist in WFU’s Chemistry Department, Salam belongs to a small group of scientists around the globe who seek to better understand the ways that nature works at its deepest level using only mathematical calculations.

Salam isn’t so much concerned with how his research will be applied. He’s more interested in determining the most accurate mathematical and physical description of such processes as quantum electrodynamics (QED), which involves the interaction of electrically charged particles.

Making Salam even more uncommon in the Chemistry field, he has written two books on QED while many of his colleagues have kept their research limited to articles in peer-review journals.

Now in his 15th year at WFU, Salam continues to look for ways to explain existing phenomena and predict new ones. While other Chemistry professors have labs staffed with student researchers, his work is so advanced and solitary that he typically has only one or two students working with him.

“As a faculty member now myself, I strive to instill in my students the same level of support and motivation that faculty like Akbar Salam so graciously instilled in me,” said Bridget Alligood DePrince, who earned a Bachelor’s of Science degree from WFU in 2005 and now works as an Instructor of Chemistry at Florida State.

“Looking back, I can say that Professor Salam undoubtedly facilitated my transition from student to researcher. He taught me how to ask hard questions and to not fear the pursuit of their answers.”

Born and raised in London, Salam was around 12 years old when he started reading books about the origin and fate of the universe. He doesn’t come from a family of scientists, but everyone encouraged his interests and left him alone as a kid to study cosmology and astrophysics.

While attending University College London, Salam’s undergraduate project involved studying the C60 molecule that was discovered in 1985. He worked on calculating its molecular structure and the energy levels using group theory (mathematical theory).

“That [project] helped convince me that that’s something I’d like to do in the future in terms of giving up experimental work and concentrating on developing theories and calculating properties and the structure of atoms and molecules,” Salam said.

Salam published his first book, Molecular Quantum Electrodynamics (2010), after realizing that only a handful of books had been written on the subject and none in decades.

He then took a sabbatical in Spring 2016 to write a follow-up, Non-Relativistic QED Theory of the van der Waals Dispersion Interaction.

“During my research project, [Akbar] was very open about getting me involved with what he was working on,” said Jessica Freyer, a WFU graduate who’s now in her fifth year of a PhD program in Chemistry at Columbia University.

“He even encouraged me to make some diagrams for a book chapter he was working on, so I could put it on my CV for grad school applications.”

Salam said he has no immediate plans to write a third book.

“I didn’t plan to write one,” Salam said, laughing. “So to have two under my belt I’m very happy with.”

He’ll save the stacks of paper for his math equations.