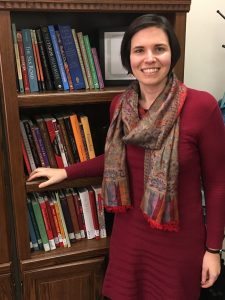 When Elizabeth Clendinning started traveling to Bangah a few years ago, she couldn’t find the Indonesian village on Google Maps.

Clendinning has made her way around Bali on a motorcycle, attending concerts, playing with local musicians, and hoping to avoid the monkeys that cause trouble on the Indonesian island.

Like other people who have developed a passion for gamelan, Clendinning has gone to great lengths to study the traditional Indonesian music that involves the playing of gongs, drums, and other percussion instruments by an ensemble.

The Assistant Professor of Music even joked that sometimes she’ll talk to colleagues who work in Bali and worry that they’re more into gamelan than she is and that they loved the music from the first time they heard it.

“The music is kind of odd. It’s very different from what I think most Americans’ sound pallets are. There are a lot of things that are very distinctive about it, and I think people tend to either think it’s amazing and fascinating and really striking initially or they say, ‘Oh my gosh, I don’t want to hear this ever again.’” Elizabeth Clendinning

Clendinning has researched music from everywhere from Bali to the Buffy the Vampire Slayer TV series. She has used her work in ethnomusicology (the study of music from different, non-Western cultures) to discuss broader topics involving anthropology, religion, and gender studies at Wake Forest University.

In the process, Clendinning has introduced WFU students to gamelan, both in her world music classes and as the creator and director of the university’s gamelan ensemble. (Send an email to her if you’re interesting in playing with WFU’s gamelan.)

“I can honestly say that if it were not for her, I would not be a music minor.”

Concert footage of Clendinning leading a gamelan ensemble while playing a traditional Indonesian drum known as a kendang can be found on YouTube.com. Meanwhile, all the cabinets in her office in the Scales Fine Arts Center are filled with her colorful Balinese dance costumes.

Clendinning said she couldn’t “escape” music while being raised in a musical family. Her father sang in choruses, and her mother is a longtime Professor of Music Theory at Florida State.

While Clendinning was exposed to gamelan on FSU’s campus when she was 12, the music didn’t leave an impression on her. She heard it again while in college, but she didn’t get into playing it.

Finally, in 2010, a Balinese dancer moved with her husband to Tallahassee so he could work on his Ph.D. in Education at FSU. When the dancer started teaching, Clendinning attended the classes and became enthralled with the music, dancing, and culture she was exposed to from Indonesia.

“I thought, ‘Hey, this is pretty great. I’ll go to Bali and check it out,’” Clendinning said. “That’s what I did.”

Clendinning has traveled to Indonesia four times since 2010, often to do research for an upcoming book on ethnomusicology and the ways that teaching world music to non-native students has shaped lives and created transnational communities.

Clendinning has stayed closer to home to write about her other academic interest – the music that’s used in films and on TV shows.

She sees a connection between the music in the two Tron films and gamelan; they’re both attempting to represent other people, other cultures, and other times and places.

“Thinking about an Indonesian ensemble, to some degree, you’re invoking another place like you would be in a science fiction film where you’re trying to create another space,” Clendinning said. “Music sound is part of that.”

American Gamelan and the Ethnomusicological Imagination (2020)