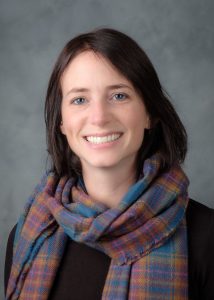 As Rebecca Gill’s students strolled into their Carswell Hall classroom, they were faced with a question that was projected onto the large screen at the front of the room.

“Why Entrepreneurship and Why Now?” had been written on a PowerPoint slide.

To answer the question she had posed to her Language, Storytelling, and Entrepreneurship class, Gill spoke about Ronald Reagan, Margaret Thatcher, and even the Kardashian family. She also discussed neoliberalism and the reality TV show Shark Tank.

“I’m a little bit of a misfit in my field because I’m drawing from the mainstream entrepreneurship literature but trying to bring it into the field of Communication,” said Gill, Wake Forest University’s new Larry J. and LeeAnn E. Merlo Presidential Chair for Communication and Entrepreneurship.

A few months ago, Gill was living in New Zealand and stressing to business students at the Massey University Business School the importance of the liberal arts. The Associate Professor is now back in the United States, teaching mostly Communication students at WFU about business and the types of narratives being told about entrepreneurs.

“Returning to the States from engaged entrepreneurship research in Auckland, New Zealand, Dr. Gill offers fresh and unique perspectives on who participates in the entrepreneurial culture. She brings a vivacious presence and boundless energy to Wake’s community.” Allan Louden, Professor of Communication who was instrumental in Gill’s hiring during his tenure as the department chair

This is Gill’s first semester teaching in the U.S. since 2014, and she has spent the past two months trying to learn her way around campus and Winston-Salem.

Gill hadn’t planned to move across the globe to teach about entrepreneurial identity. She was raised in Massachusetts, went to graduate schools in Montana and Utah, and then worked at Texas A&M.

However, the head of Massey’s School of Communication, Journalism, and Marketing had served as Gill’s advisor at the University of Montana. He knew she was looking for a new challenge, and when a position opened up for her in New Zealand, she accepted it despite some initial reservations.

“I think one of my words that I say a lot about New Zealand is that it’s magical. It’s a really magical place to be,” Gill said. “The land is stunning, and it’s a remote country with not a huge population.”

Gill wasn’t necessarily in a hurry to leave New Zealand after co-authoring her first book, Organizations and Identity (2017), which discusses how identities are formed and the reasons they’ve become so relevant in today’s culture.

But WFU offered her the opportunity to better integrate the study of Entrepreneurship with Communication, which is something she had been looking to do for years.

In Spring 2002, Gill was taking a qualitative methods class as a second-year Master’s student at Montana. She had to interview people for a class project, but she had no idea who to pick.

A friend then told her that Newsweek magazine had just written a profile about him and his brother. At the time, her friend was a 21-year-old Syracuse University student who had raised around $1 million in venture capital.

“I just started to think, ‘OK, there’s something going on here with young people and entrepreneurs,’” Gill said. “And of course this was right at the end of the dot.com boom and so I just kind of observed that and decided for that project for that semester I would interview youth entrepreneurs.

“And so really it started then and I’ve never looked back.”

Gill acknowledged that most of her colleagues in Organizational Communication typically study large companies and corporations, not the young founders of Instagram, Twitter, and Airbnb like she does.

However, the image of the entrepreneur has changed over the past decade from powerful older men such as Steve Jobs and Richard Branson to baby-faced social-media whiz kids who aren’t much older than her students.