The Buzz Around Hidden Meadows Honey

The Buzz Around Hidden Meadows Honey 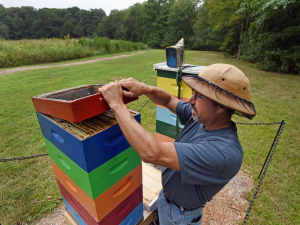 A jar of David Link’s Hidden Meadows honey may be light and fruity or dark and hearty. You can spread it across a fig or add a dollop to your tea. With each jar, the honey – infused with the pollen of that season and location – brings a unique flavor to each serving.

“These are raw honeys, and they still have the pollen in them. It is a different consistency. They have very individual, unique flavors to them,” says David, teaching how to distinguish his local honey from blended commercial honey during a tasting at ZSR Library in October. Platters of fruits, crackers, and bread sit before a line of different honey harvested from various hives and seasons. Even the color of the honey varies from jar to jar.

David, who works as a Library Specialist on the Reynolda Campus of Wake Forest, has been managing hives of bees going on a decade now and harvests individual hives at various times, rather than waiting to the end of a season. Some jars feature blueberry, others elderberry. Tulip Poplar, a favorite choice for those wanting a sweetener in their coffee, is dark and earthy. “Because I have pockets of bees in different areas and they are exposed to different plants, depending on when I harvest and on what has bloomed in that area, I get a different type of honey,” David says.

Hidden Meadows gets its name “because I’ve got little pockets that are hidden in different places,” David says. At any point on campus, you are just a few miles from one of his 110 hives scattered around town. There’s boxes of bees on Faculty Drive and a rainbow-colored display in Reynolda Gardens. He has several communities along Polo Road. In 2016, Provost Rogan Kersh named David a Champion of Change during the WFU Campus Sustainability Awards for his leadership and involvement with his hive at the WFU Campus Garden. 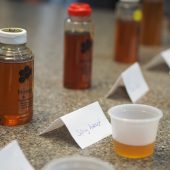 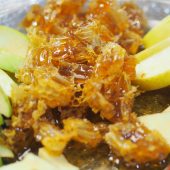 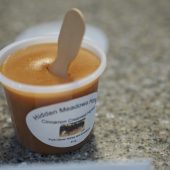 He offers traditional liquid honey but also a special creamed version of certain flavors. The crystallized cream option spreads like butter and is good to serve on warmer items, such as bagels or warm bread. David enjoys a cinnamon cream honey with peanut butter. “There’s always something new to do with them,” he says.

In addition to his work within ZSR Library and as a licensed landscaper, David is focused on keeping his hives – and other bees in the area – healthy and happy. He is part of the Forsyth County Beekeepers, which celebrated its 50th anniversary last year. The organization teaches a spring beekeeping class that averages about 100 participants. The popularity of beekeeping isn’t contained to North Carolina. In 2018, the United States honey production from producers with five or more colonies totaled 152 million pounds, a 2 percent increase over the previous year, according to the U.S. Department of Agriculture.

David says some will stick with it; others will not. He mentors four or five new beekeepers each year, keeping them on for two years to help them navigate the pitfalls that come with raising bees. “Beekeeping is a commitment,” he says. “It isn’t cheap to get started with the bees.”

He’s learned through trial and error at times. For instance, David’s a big fan of the Russian honeybee, converting his hives from Italian honeybees after his first few hives failed. While the Italian variety is favored in the U.S., they lack a grooming trait found in the Russian bees to naturally remove Varroa mites – a parasite that researchers are examining in connection with colony collapse. By using genetics rather than chemicals to enhance his hives, David is able to avoid spraying or treating the hives artificially. “Bees are exposed to enough pesticides and such that I didn’t want to put any kind of add-on into the hive to help control those mites,” he says.

Raising bees isn’t just about gathering honey, either. More bees also means more pollination for plants nearby, and the impact of honeybees on agricultural production is significant. The U.S. Department of Agriculture says pollination by managed honeybee colonies adds at least $15 billion to the value of U.S. agriculture annually through increased yields and superior-quality harvests.

That’s not shocking for David, who started beekeeping because he didn’t have enough pollinators for his garden. A friend brought over two hives, and David’s been raising bees ever since. “The more pollinators we can get out there, the better off everyone is going to be,” says the gardener-turned-beekeeper.

Hidden Meadows honey can be found on the shelves at Twin City Hive, Angelina’s Tea Room, and Frank’s Perennial Border.

“The more pollinators we can get out there, the better off everyone is going to be.”